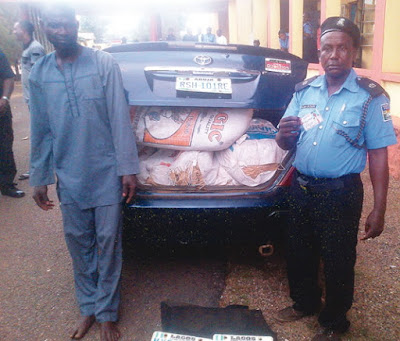 A police inspector attached to the EFCC was yesterday brought before a Federal High Court in Lagos for allegedly dealing in drugs and obstructing the National Drugs Law and Enforcement Agency (NDLEA) from doing its job.

Bola Adigun was arraigned by the NDLEA before Justice Cecilia Mojisola Olatoregun.

He is standing trial for alleged conspiracy, drug dealings and wilful obstruction of security agents from carrying out their duties.

According to NDLEA prosecutor Mr. Aliyu Abubakar, the accused “and one Voke David, now at large, of Jakande Estate, Amuwo Odofin, Mile 2, Lagos” committed the offence on May 25, 2017, at about 1am, along Badagry-Lagos Expressway, at Agemowo Junction.

NDLEA also alleged that the accused, “while armed with a Jericho Pistol numbered BDA 380425pm 56369, calibre 9.85 CAT 1661 loaded with 10 rounds of ammunition, wilfully obstructed the NDLEA officials from exercising the powers conferred on them by the NDLEA Act.”

Each surety must be a landed property owner, show evidence of three years’ tax payment and have his address and means of livelihood verified.

The judge ordered that the accused be remanded in prison custody pending the perfection of the bail conditions. She adjourned till the 27th of June.