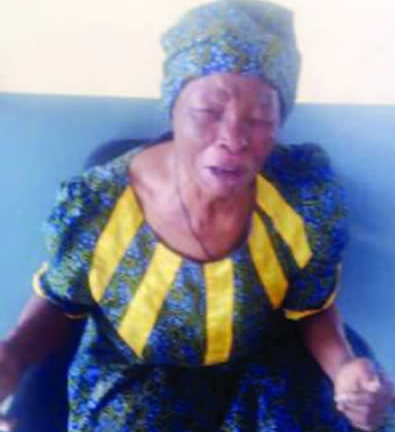 March 2nd, 2017 – 85 Year Old Widow Abandoned By All Her Children Cries Out For Help

85-year-old grandmother, Mrs. Bolaji Isaac, says anytime she dies, she will be going to the grave with sorrow and bitterness.

Bolaji told PUNCH Metro that she had nothing to live for and preferred death because all her five children rejected her and efforts to see them had been abortive.

The Ikare, Ondo State indigene, said an apartment rented for her by a Pentecostal church in Lagos, Mountain of Fire and Miracles Ministries, had been forcefully taken by her second son, identified as Sola, who chased her out.

The octogenarian told our correspondents that she was in dire need of another accommodation, appealing to Nigerians to prevail on her children to meet with her before her death.

She said, “I had 10 children. While five of them died, five survived. My husband died about 20 years ago and I started selling paper bags to hospitals and clinics. When I didn’t have money to continue the work, I stopped.

“I was formerly living in the Alagbado area of Lagos State, but my son, Sola, chased me out. He came from Ondo State to live with me.

“His wife called me that I should send him back, but I ignored her. Later, I agreed when the pressure became too much. When I asked him to return, he refused and started fighting me.”

She added that anytime she called her fourth child, Samuel, a lawyer, he always gave excuses of being in court, promising to call back, without doing so.

Bolaji, who explained that Samuel prevented her from knowing his address, said other children also gave excuses instead of catering to her.

When our correspondent asked about her siblings, she lamented that they had equally forsaken her.

“When I had money, my mother advised me to take care of them that they would help my children in the future. I sponsored their education, but now, they don’t care about me. I don’t know what I did to deserve the treatment. I want to die. This suffering is unbearable,” she added, as she burst into tears.

Bolaji told PUNCH Metro that she later moved to the Ladipo area of Oshodi where an old friend, Mrs. Sadatu Ahmed, had been sheltering her for the past eight months.

Our correspondent learnt that Bolaji survived on a weekly N2,000 stipend she received from the MFM every Monday.

Her friend, Ahmed, who claimed to have known her for 25 years, said Bolaji used to visit her during their youthful days.

The 52-year-old added that she could not send her away when she came to her house.

“She was sleeping in the verandah of our compound, exposing herself to cold and mosquito bites. When I couldn’t bear it, I begged my son to allow us to accommodate her and he agreed.

“She cannot go to toilet on her own and she does not sleep well. I bathe her and keep vigils over her. She cries every day. She complains of pains in her legs, stomachs and other body parts. She is really suffering.

“Anytime I call any of her children, they do not pick the call. When they do, they are quick in cutting off the call. One said he was a family man and if he had to choose between his mother and wife, he would choose his wife.

“I am being forced to send her out of my house. My neighbours said if she died, I would be in trouble. I don’t want to go to jail for helping someone in need,” she added.

However, Samuel, on the telephone, said his mother was troublesome, adding that he kept her away from his family to avoid having issues with his marriage.

He said, “She was formerly living with my elder brother, Tope. She was always quarrelling with his wife to the extent that they would engage in fisticuffs. And it was regular. I witnessed the fights while I was in the university and that was why I decided never to allow any family member live with me.

“She cannot live with any of her sons without having issues with their wives, so we are trying to make enquiries about old people’s home for her because that is the next step. Just last week, we all contributed N25,000 to give her; so I wonder where the issue of neglect is coming from.

“My wife and I are too busy and if she stays with us, she will still complain of neglect. It is not important that she knows where I stay; the most important thing is that she is taken care of.”

Samuel, who confirmed that Sola stayed with the mother at a time, said he could not say if he sent her out.

He said although he didn’t know who she stayed with in Lagos, he sometime sent her money through his partner.