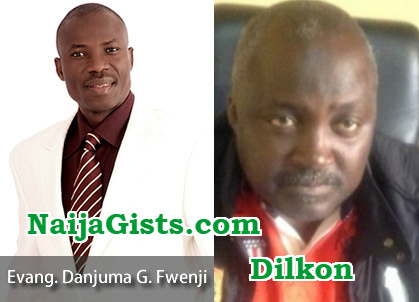 A Bukuru Chief Magistrate’s Court in Plateau has granted bail to Evangelist Danjuma Fwenji, who was alleged to have criminally enticed Joy, the wife of Mr Leonard Dilkon, a former House of Representatives member.

The accused, who is the Overseer of God’s Grace Divine Mission, Jos was granted bail in the sum of N1.5 million at the hearing of the case on Wednesday.

NAN reports that Dilkon, who represented Pankshin/Kanam/ Kanke constituency in the House of Representatives between 2003 and 2007, had dragged Fwenji to the court for allegedly sleeping with his wife.  Fwenji denied the allegation.

At the resumed hearing of the case on Wednesday, his counsel, Mr Smart Irabor, prayed the court to grant his client bail, quoting section 36 (5) of the 1999 constitution that held that an accused person was innocent until otherwise proven.

Irabor told the court that his client would neither jump bail, nor interfere with police investigation.

“I can also assure the court that my client will always be available for trial,” he said.

Irabor further urged the court to grant the accused bail based on self-recognition.

But Mr Francis Okafor, counsel to the complainant, who did not object to the bail appeal, prayed that the court should take stringent measures in granting it.

“This is important because the accused has been avoiding the court.

“He has always refused to appear before the court to clear himself of the allegations levelled against him.”

Okafor recalled that two bench warrants were issued on the accused but that it had always been difficult to serve him because “he moves around with armed policemen”.

The counsel said that the demand for bail on based on self-recognition was “an insult” to the court because the case was a direct criminal complaint and not a police prosecution.

In his ruling, the Chief Magistrate, Sam Galadima, admitted the accused to bail in the sum of N1.5 million and two sureties in like sum.

Galadima said that the sureties must be persons of standing and proven integrity, and must also reside within the jurisdiction of the court.

The magistrate adjourned the matter till April 27, for further hearing.

Bolaji Isaac, 85 Year Old Widow Abandoned By All Her Children Cries Out For Help
White Italian Boy Refuses To Stand In front Of Black Footballer Because He Thinks He Is A Monkey