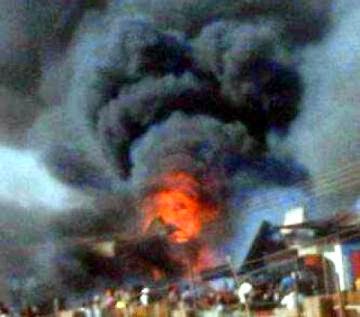 Not less than 4 people were killed on Thursday at a location very close to Gombe State Governor’s residence.

A pickup truck fully loaded with grain bags exploded near Governor Ibrahim Dankwambo’s house. The explosion happened around 630pm in the Government Reserve Area of the state.

“The van was moving when it exploded and killed the two men inside it and two soldiers inside the armoured vehicle stationed near the governor’s personal house,”

“It is not clear if the governor’s house was the target or if the explosives went off prematurely before they reached their destination.” – the source said on condition of anonymity.

Security sources still unsure if the attack which shook the entire city was carried out by Boko Haram militants.