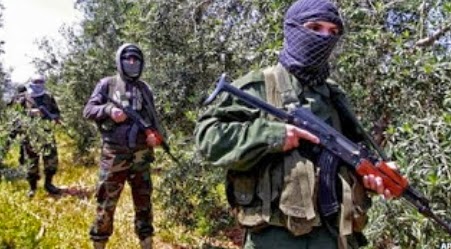 Boko Haram fighters struck again in Borno state where they attacked Nigerian soldiers at a checkpoint, overpowered them and burnt down a Roman Catholic church.

According to a Local Government official in Madagali, the attack was carried out early Thursday morning around 6 am.

The gunmen dressed in army uniform arrived in 10 all-terrain vehicles and motorbikes.

“Due to their huge number and sophisticated guns, they overpowered the soldiers, who withdrew from the checkpoint,” .

“The gunmen then attacked and burnt a Roman Catholic church and the local government secretariat opposite it,” Madagali LGA official said.

After the attack, the militants reportedly drove off into the bush.