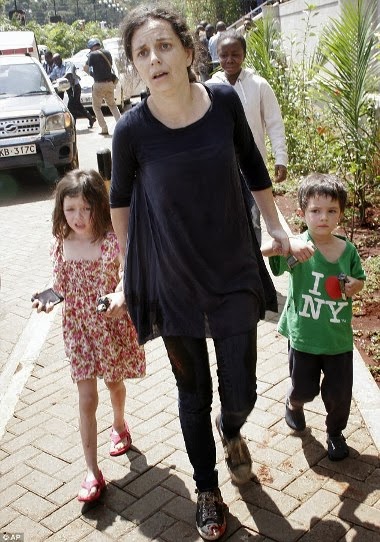 A very emotional yet thankful story has surfaced from the present terrorists attack at Westgate Mall in Nairobi Kenya.

A 4-year-old boy who was among the hostages confronted a terrorist who shot his mum on the leg few hours ago, his bold move forced the terrorist to apologize and free his family.

He was later handed chocolate as the terrorist released his mother and sister.

According to Daily Mail,  Elliot Prior, from the UK told one of the terrorists that he was a ‘very bad man’ as he protected his mother, Amber, who had been shot in the leg, and six-year-old sister Amelie. Incredibly, the attacker took pity on the family and bizarrely handed the children Mars bars before telling them: ‘Please forgive me, we are not monsters.’

His story emerged as sporadic gunfire continued to ring out from inside the mall early today as Kenyan security forces battled Al Qaeda-linked terrorists into a fourth day.

Despite Kenyan police assurances that they had taken control of the building, a security expert with contacts inside the mall said at least 10 hostages were still being held by a band of attackers, possibly as many as 13.

Kenya’s foreign minister Amina Mohamed said ‘two or three’ Americans and one British woman were among those who attacked the Westgate shopping mall in Nairobi.

His mother, Amber, told of her family’s terrifying escape from Al Shabaab terrorists who butchered 62 people in the Nairobi shopping centre.

The film producer had been queuing to buy milk in Nairobi’s Westgate Shopping Centre when the militants struck.

She hid under a cold meat counter in the Nakumatt supermarket for an hour-and-a-half with her children beneath her before terrorists finally found them and shot her in the thigh.

OMG this is so so emotional.

Despite her injury the mother of two still managed to escape with her two children.

This boy is indeed an hero.