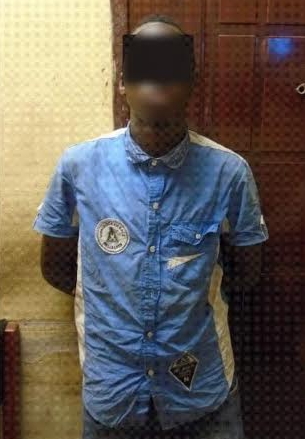 A teenager has been rescued from the grip of death by some RRS (Rapid Response Squad) officials on patrol on the Third Mainland Bridge.

Around 4pm today Thursday the 24th of March 2016, a mechanic directed the attention of the RRS officials to a spot on the Third Mainland bridge where a 17-year-old boy was trying to dive into the lagoon.

Just as he was about to dive into the lagoon, the police officials held his legs and took him to their office for counselling and investigations.

The boy told them he lost hope after some area boys snatched his phone and the N6000 his mother gave him to purchase foodstuff at Ita Faaji.

He said he doesn’t have courage to confront his mother at home and that’s why he decided to end his own life.

His mother (name withheld) who is in her mid 50’s said she has been looking for him for close to 4 hours.

“I have searched everywhere, his friends’ and the entire neighbourhood. I was shocked to learn that he has attempted suicide by jumping into the Lagoon. He has just finished his secondary school. He went to Lagos City College. I don’t know why he wanted to commit suicide”.

“If he had returned home to tell me what happened, the worst I could have done was to slap him and threatened him to return my money for me. I know I have been an exceptional mother to the four of them. I have never allowed them to miss their father and they are doing quite well in their studies”.

The worried-looking woman said their father abandoned them and travelled abroad but she has never allowed them to suffer.

The teenager has been released to his mother. They are both to report back next week Thursday.