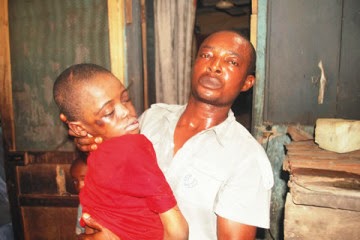 More details have emerged on the mysterious death of a 12-year-old boy in Agege area of Lagos state Nigeria on Monday evening.

NaijaGists.com initially reported that the deceased was the suspect’ son but according to police investigation, the boy was a relative.

Here is how Punch Newspaper reported it:

The Lagos State Police Command has arrested a man, Mr. Paul Obiefule, for allegedly beating his 12-year-old relative, Onyedikachi Mbanozo, to death on Monday evening around 8.30pm. Onyedikachi, Obiefule’s wife’s brother, was staying with Obiefule, a bricklayer, and his wife on Omitola Street in the Agege area of Lagos.

A neighbour who identified himself as Mr. Oje Owode, said the boy died from an accumulation of floggings which he received from his aunt’s husband. Onyedika, who was attending Irewole Primary School in Agege, could not go to school for several weeks before his death as a
result of a sickness sustained from series of beatings.

“The man (Obiefule) usually flogged the boy like an animal. Most times, we tried to intervene, but he would not listen to us. The boy fell sick several times from Obiefule’s merciless flogging. The last sickness was for over two weeks. And then on Monday again, the man beat the sick boy, and locked him up in the room. Later, we just saw that Obiefule and his wife went out of the house and did not return until around 5am. We noticed that he put a big bundle on his shoulder and smuggled it in with his wife.

We did not know that the boy had died in the evening and they were looking for where to dump him all night. That was when we raised the alarm and reported him to the police.”

Another neighbor, Mr. Fatai, said Obiefule usually used hammer, chisel or a screw driver to inflict pains on the deceased. It was learnt that as soon as Obiefule was arrested on Tuesday, his two boys were taken to a primary school on the next street. When our correspondent visited the school, the proprietress, who did not want her name to be mentioned, said Obiefule’s two boys had not been spared from their father’s wickedness.

What a wicked man!….Hahahaha There is God oooooooo.