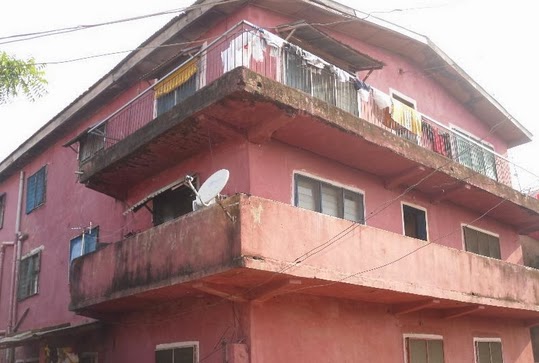 Feb 7, 2014 – Angry Father Throws Daughter From 3-Storey Building After Catching Her With Boyfriend In Lagos Nigeria

Deji Kamoru, a very wicked father who has problem controlling his anger is currently in police detention for throwing his own daughter, a 14-year-old Aishat off a 3-storey building after he caught her with a man in his bedroom.

Angered by the presence of the unknown man in his bedroom, he allegedly tied Aishat’s hands, tortured her and threw her from the third floor of their house at Oroyinyin Street, Lagos Island, Lagos State, southwest Nigeria.

Aishat landed on the ground, she hit her head against a metal object and became unconscious. The teenager was rushed to Lagos Island General Hospital in Lagos where she is under intensive care.

Though Aishat is still alive, it was gathered that she cannot talk or recognise any body at the hospital.

The police at Adeniji Adele Division arrested Kamoru but later released him on bail so that he could take care of the victim and foot her medical bill.

We gathered that Kamoru separated from Aishat’s mother some years ago and took custody of their four children, including Aishat, whom he has been living with before the incident happened.

On the day the incident happened, Kamoru, who is a driver and security guard, went to work and returned early to prepare for his night duty but met the door to his apartment locked inside.

Convinced that Aisha was inside and must have locked the entrance door to their apartment, he started knocking at the door until she eventually opened it.

Before Kamoru could react when he sensed that his daughter was with someone, Aishat’s boyfriend reportedly escaped. He lost his temper and allegedly tortured and threw her from the third floor of their house.

The landlord of the house, who did not want his name mentioned, confirmed the incident. He said he was shock that a man would express his anger by causing such pain to his own daughter.

“Though I do not justify what his daughter did, he should have controlled his anger,” he said.

One of the staff told our reporter that the victim has been in coma for days and was later transferred to LASUTH for further examination and treatment.

The DPO of Adeniji Adele Division, Monday Agbonika, who confirmed the incident, declined further comment and referred our reporter to the Police Public Relations Officer, Ngozi Braide, saying the most important thing for now is to save girl’s life.

Lord have mercy! What a heartless father.