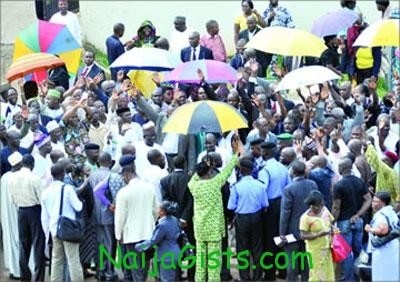 Migrating for greener pastures’ has been a recurrent clause in Nigerians’ daily conversations since the turn of the 1970’s when the culture of military impunity and bastardization of the economy forced citizens to seek better opportunities and prosperity elsewhere.

Over the following decades, as the country’s economic fortunes continued to plummet, more illustrious countries had tightened their borders, leaving majority of Nigerians to pursue less legitimate modes of migration such as the valleys of the shadow of death through the Sahara desert or the suicide mission through the Mediterranean Sea.

A lucky minority left through visa lotteries and educational tourism. Still, much of the skilled workforce- those referred to as the middle class which has now shrunk spectacularly- hung on to their relatively comfortable government jobs and were scarcely interested in abandoning their pensionable appointments for an uncertain and apparently less secure opportunities abroad.

Alas! The times have changed in a remarkable way. As I write, almost every health professional that I know who is less than 50 years, has either migrated or is planning to migrate to the UK, Australia and Canada. This set of people includes accomplished doctors in government hospitals who are happy to divorce the thoughts of pension and gratuity to relocate to Canada or Australia.

The UK’s Professional and Language Assessment Board (PLAB) is currently inundated with applications from Nigerian medical practitioners desperately vying to move permanently to Britain to ply their trade. To say it matter-of-factly, doctors who are laid back and not interested in migrating seem to be either too old to make the move, too rich to bother or do not have the right information or clue about what practice elsewhere means or promises.

Australia and Canada which have more robust immigration programmes are attracting not only health professionals, but all manner of skilled professionals; and our lawyers, engineers, scientists and academics are taking full advantage. From my own observation, it seems to no longer matter if some will not eventually practice their particular professions or whether they have to settle for less dignifying jobs (which pay better than white collar jobs at home, by the way), the goal is to leave!

Why are these countries opening up their borders and stealing our skilled manpower?

There are many reasons smarter countries are picking the best brains from around the underdeveloped or developing world. Firstly, every serious country recognizes the role its skilled workforce plays in economic development. In the area of health, for example, doctors and nurses from third world countries such as India and Nigeria make up the huge percentage of health professionals practicing in the UK, US and Canada. Rich Nigerians who can afford the humongous bills paid for treatment abroad will recognize that they are in many cases attended to by fellow Nigerians. The monies spent abroad go into the economy of those nations. This practice of having to travel seven lands and seven seas to meet fellow citizens practicing in places that have been cleaned up is synonymous to the other equally appalling culture of exporting our crude and paying mouth-watering amounts to buy them back as refined products.

Secondly, while these nations rake in the monies that should have gone into developing our own healthcare, they are also using our skilled manpower to make up for their own aging populations or shortages of skilled workforce. For instance, according to the 2016 Canada census, it is projected that by 2031 one in every four Canadians will be over 65 years of age. This statistics will get scarier with time as more and more people in Western societies are less worried about making babies. Therefore, the policy of importing younger, competent personnel sounds like a good idea. For the immigrants it may not be all rosy. There is the threat posed by xenophobes, racists and white supremacists which will always leave the feeling of nostalgia for a home that can be considered safer, even if only safer; but that is a story for another day.

Canada and Australia have perfected their skills-based immigration programme so much that the new UK Prime Minister, Boris Johnson has taken a cue and announced plans to emulate such a system in preparation for the expected economic dynamics after Brexit. This only further illustrates the economic worth of hiring skilled immigrants.

Australia, Canada and the UK are not alone! Donald Trump is also revamping America’s immigration programme to admit only individuals who have the wherewithal or the skill-set to make developmental impacts in their country. The common denominator in the intentions of these nations is to ‘pilfer’ the best of the best to themselves, leaving the exporting nations with increasingly less qualified people. The point-based immigration system they are all embracing is only a sieving mechanism and only those with the money and brains will be selected. Apparently, many Nigerians do not want to be left behind, with everyone scrambling to ‘put head’ anywhere – be it China, Abu Dhabi or even nearby African countries like Ghana, Mauritius and Botswana.

But what is Nigeria doing about the current massive wave of brain-drain?

As far as I know, Nigeria is asleep and snoring away. She does not seem to care, after all she has close to 200 million people. This is eminently confirmed by the response of the minister of labour and employment, Dr Chris Ngige, who announced on live television on April 24, that Nigeria had no need to worry about the spate of mass migration of Nigerian doctors to the rest of the world. With an insouciant air of detachment, he said, “No, I’m not concerned at all. I’m not worried. We have surplus. If you have surplus, you export”.

But Nigeria does not have surplus. We may have a surplus population of about 200 million people but according to UNICEF, 10.5 million of our under-15 are out of school. The UN also reports that about 92 million of our people live in extreme, desperate and multi-dimensional poverty. When broken further down, you have the remaining 100 million who are either trooping into higher schools without any hope of employment and tens of millions of others who have graduated without any gainful employment. Indeed, with WHO’s 2015 Workforce Alliance report that puts 10,000 Nigerians to four physicians and 16 nurses respectively, we do not have any surplus. What is more, if the current tide is not contained what would be left behind in the country after the very best have left would be the inexperienced or the aging professionals.

The consequences of the brain drain transcend merely the implications on our institutions, especially the health system. The economic implications for Nigeria are also sources of concern. With a shortage of manpower and the rampant corruption in high places, Nigerians who reside abroad are under enormous pressure to cater for the needs of their wards back home. These Nigerians also remit huge sums of money back to the country which goes into the coffers of government and disappears without anything to show for it. This contrasts with what countries like India have done with the repatriated funds of their emigrated citizens. The initial impacts of mass migration of highly skilled Indians have been offset by the reinvestment of the revenue sent back by these people, enabling the country to build its ICT and health systems to enviable standards.

Nigeria must wake up and take notice of the long-term effects of the dwindling skilled work force or be ready to face the dire consequences. Repatriated funds by Nigerians in the Diaspora might be an enticing justification to encourage the exportation of skilled professionals which might explain why Dr Chris Ngige’s earlier stance on the matter ostensibly earned him a reappointment as labour minister, but when these monies face the same fate as the millions of repatriated and recovered loots, travelling politicians will continue to dread the ire of these ‘abroadians’ who are evidently not comfortable that they still have to share the burdens of a seemingly dysfunctional country from which they thought they had escaped.

About the author: Orji, an academic and medical scientist, writes from England, UK.

Continue Reading
You may also like...
Related Topics:brain drain, nigeria

Billionaire Kidnapper Wadume Linked With Terrorists & Cattle Rustlers
If You Are Very Good At Something, Never Do It For Free