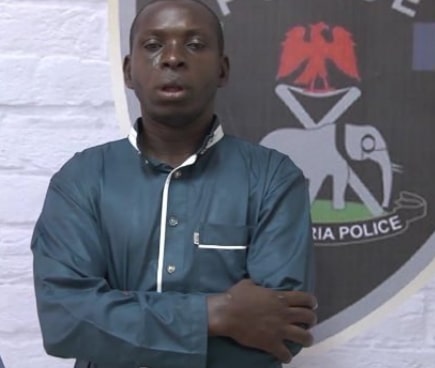 4 kidnap victims have identified Hamisu Bala Wadume as leader of the gang that seized them, it was learnt at the weekend.

Wadume, a suspected kidnapper, is undergoing interrogation after he was rearrested last week in Kano by police detectives.

He is being probed over his escapades and the killing of three policemen and a civilian by soldiers at a checkpoint in Taraba State, when he was being whisked away after his arrest for ‘kidnaping’

Although he initially denied being a kidnapper but admitted to being an arms supplier to kidnap syndicates, the kidnap victims, it was gathered, contacted detectives after seeing Wadume’s photographs and video footage of his confession, and came forward to identify him to investigators.

The victims, it was learnt, were the latest addition to the list of Wadume’s kidnapping victims said to have indicated willingness to testify against him.

Four AK47 and two K2 rifles were recovered from one of Wadume’s relatives. Who claimed they belonged to the suspect.

Wadume was said to have purchased 10 Ak-47 rifles from the black market within one year, adding that he admitted to gun running because of the possession of firearms which he could not explain.

A source said: “The suspect is smart. It is better to confront him with evidence. He could not explain the guns that were recovered and so he confessed that he was selling guns.

“He was a kidnap kingpin. Four more people he kidnapped have contacted the police and identified him. They have given details and are willing to testify against him.

“Investigators are confronting him with evidence of his crimes and he cannot deny them.”

The source also confirmed that Wadume’s gang members were responsible for most of the kidnap cases in Northwest and Northcentral regions, adding that he confessed to have been fueling security patrol vehicles in Ibi Town.

Wadume, it was gathered, also allegedly had links with terrorists in the northeast and cattle rustlers most of who he sold arms and ammunition to.

Wadume’s revelation widely published in newspapers at the weekend, has created anxiety as the Joint Investigative Panel set up by the Defence Headquarters (DHQ) to probe the killing of three undercover policemen and a civilian on Ibi-Wukari Road by soldiers of 93 Battalion Takum is set to submit its report.

There are speculations that the report of the panel constituted by the Chief of Defence Staff (CDS), Gen. Abayomi Olonisakin on the orders of President Muhammadu Buhari is set for submission.

A source said it might be submitted today or latest before the end of this week.

The source said: “The joint panel will not be distracted by the publications and what some people have been saying on this matter. President Muhammadu Buhari ordered an investigative Panel.

“This is procedural. The military and other security institutions know that in any assignment before them, they must follow procedures. When the late CDS, Air Chief Marshal Alex Badeh was murdered, a panel was set up by the DHQ. Were you people invited to the DHQ to cover the submission of the report of the panel?

“The joint panel is aware that some people are pushing an agenda, but we will not be distracted. The panel will do a thorough job, I can assure of that. Some have been saying all sorts of things, including dishing out unverified information from a principal suspect. They just want an indictment. But you have to support it with concrete, unassailable evidence.

“The panel will have to examine the exhibits, visuals materials, interrogate all the suspects, review and distill all information available before coming up with a report. The report must stand the test of time and withstand any challenge at any court.

“They should know it is not easy to just indict anybody, you must do your work thoroughly. That is what the panel is after.

The Nation also gathered on Sunday that the seven-man panel with members drawn from the Army, Navy, Air Force, Police, Department of State Security (DSS) and the Defence Intelligence Agency (DIA), have raised suspicion over the video confession by Wadume released by the Police headquarters in Abuja.

It was gathered that the panel also frowned at Wadume’s interview published the media, wondering why it was allowed since the suspect was supposed to be under tight security.

It was learnt that the Nigerian Army was planning to move all soldiers and officers allegedly involved in the incident to the Brigade in Yola, the Adamawa State Capital, from where they would be transferred to the Headquarters 3 Division in Jos, Plateau State.

Defence Headquarters Col. Onyema Nwachukwu, declined to comment on the issue. He said the panel to be allowed to do its job and appealed to the media to avoid setting an unnecessary agenda for the panel.

He said: “I think you should ask the police. Wadume is with them and they have released video and have been talking about it. The DHQ is there. I have told you before that whatever is going to happen, whatever issues will arise and whatever evidence that are available will be referred to the panel.

“Let us avoid insinuations and avoid preempting the outcome of the findings of the panel. Let us give the panel time to do its job and come out with their findings.”