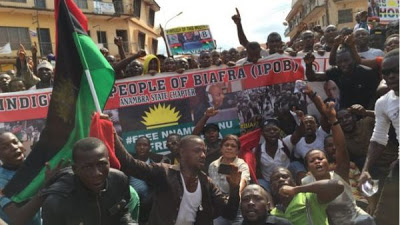 On Wednesday, chaos erupted among members of IPOB (the Indigenous Peoples of Biafra) as a faction threatened to burn the Biafra flag which the group promised to display on October 1, this year.

This is even as seven members of the group were arrested and detained briefly for allegedly meeting in a building in Aba, Abia State yesterday. Also, an ex-Biafran soldier cautioned IPOB to pursue the agitation for Biafra republic peacefully.

The breakaway group denounced IPOB and threatened to burn the flag.

“We believe in being a part of a united Nigeria, and a new way of thinking, a statement issued by Chima “Phillip Effiong”.

“The lessons and history of the civil war will only reinforce the belief in ourselves to reach the zenith in this great country, Nigeria, where opportunities abound for every one regardless of tribe or religion, and even where such narrow sentiments exist, we will not see ourselves as victims. Never!” – Osuji said

According to the statement, the new group known as the Rebranded Indigenous People of Biafra (TRIPOB), the decision was taken on Monday at the end of an emergency meeting of “disaffected” IPOB members.

The group said that it had accepted the fact that the Biafra Republic was not a reality but an anachronism, and doubts that the south-south region will ever become a part of a Biafra Republic, except by force after a declaration of another civil war.

Meanwhile, 7 IPOB members who were arrested by the police in Aba, Abia State have regained their freedom. The men were meeting at an undisclosed location along Osusu Road, Over Rail in the commercial city yesterday, when police stormed the place and arrested seven of them.

According to a source, those arrested protested to the police that their meeting was not illegal as they did not engage in acts that disrupted public peace.

Continue Reading
You may also like...
Related Topics:biafra, flag, ipob