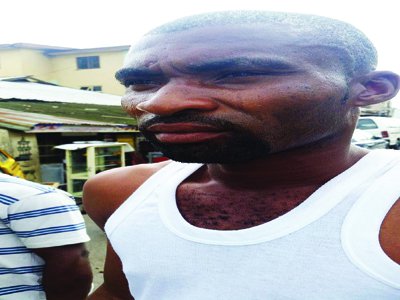 There was panic in Ilupeju, Lagos yesterday as policemen shot at a passenger-laden commercial bus.

The policemen have been arrested and being detained at Ilupeju Police Station on the order of Lagos Command spokesman Kenneth Nwosu, a Deputy Superintendent (DSP).

Nwosu told our reporter last night that what the policemen did was wrong.

The policemen pursued the bus from Ikorodu Road into Adegboyega Street in Ilupeju, shooting, with passersby and residents running for cover.

They fired at the Oyingbo-bound vehicle, with number-plate KRD 516 XF when the driver allegedly refused to stop as ordered. The bullets hit the front tyre which got burst while the bus was on motion.

The incident happened at 9am on the one-lane Coker Road in Ilupeju in Odi Olowo-Ojuwoye Local Council Development Area (LCDA). The bus was carrying traders who went to buy food stuff at Mile 12 Market in Ketu.

When the driver eventually stopped in front of a church on Adegboyega Street, four policemen, riding in a pick-up marked, “Police Ilupeju Division” with number-plate MUS 04 AW, descended on the driver and his conductor, with the butts of their rifles.

The passengers fled the scene to avoid being beaten by the policemen, who also used the sharp ends of their guns to deflate the bus remaining tyres. It took the residents’ intervention to rescue the driver from the policemen.

Tempers rose when the residents demanded to know the offence of the driver, who was identified as Fatai Olatunji. The policemen tried to whisk him away, but residents resisted the move. The officers were also prevented from towing the bus to their station. Hot arguments ensued between the residents and the policemen, which almost led to confrontation.

Afraid of being attacked by the mob, one of officers, Adams Ajih with Force Number 358918, called their station, claiming that the driver attempted to kill them.

Speaking to our reporter, Ajih said: “The commercial bus driver took the wrong lane and faced the police vehicle. We tried to stop him but he fled. This is why we chased the bus. But, it is not true that we fired shots at the vehicle. Rather, the driver attempted to kill us by driving on our lane.”
When our reporter told the policemen that Coker Road is one-lane, Ajih insisted that the driver was driving on “one-way road”.

Olatunji denied taking one-way, alleging that the policemen attempted to extort money from him.

Olatunji said: “I was coming from Ketu and passed through Ilupeju to avoid the traffic gridlock on Ikorodu Road. As I drove on Coker Road, I discovered a vehicle had broken down on the road. I moved to negotiate to the opposite lane to avoid the faulty vehicle and rejoin the lane in the front; then, I saw the police pick-up coming from the opposite direction. I moved back a bit to allow the policemen go, since they have the right of way. But, they asked me to stop. I asked what my offence was, but they could not mention anything.

“One of them came down and broke my side mirror. Another officer also shot at the vehicle, which made me to drive away from the scene. The policemen made a turn and ran after my bus. I later found out the front tyre had burst after being hit by bullets.”

A passenger, who gave his name as Taofeek, said the passengers were terrified by the policemen’s action.
As the mob grew, the policemen left, saying they were going to get a towing-vehicle to remove the bus from the road. They did not return.

Another officer in the police vehicle is Monday with Force Number 362282.