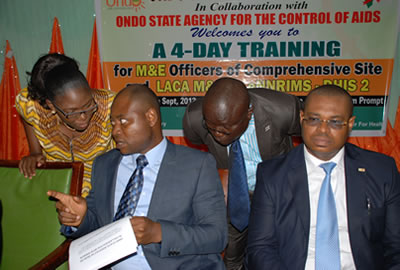 The Ondo State government yesterday warned People Living With HIV/AIDS (PLWHAs) against the spread of the disease, vowing that anybody caught would be jailed.

The government said the decision was in line with the HIV’AIDS Anti-stigma law, which prescribed a 10-year jail term, fine of N500, 000 or both for any person who by whatever means transmits HIV/AIDS to another person.

Explaining details of the law, which was signed last year, the Secretary to the State Government and Chairman, State Agency for the Control of AIDS (OSACA), Dr. Aderotimi Adelola, said the stigmatisation and discrimination discouraged individuals infected with the HIV virus.

Besides, he said anybody who discriminates against PLWHAs commits an offence and is liable to a fine of N100, 000.00 or imprisonment of six months or both.

Dr Adelola, who spoke at a sensitisation programme organised by OSACA in Akure, said: “Most times the rights of PLWHAs are violated, causing them to suffer both the burden of the disease and the consequential loss of other rights.

“Stigmatisation and discrimination may obstruct their access to treatment and affect their employment, housing and other rights.”

Commissioner for Information Kayode Akinmade said Ondo is the first state to have a law which addresses many aspects of HIV/AIDS.

He said the law would help reduce the rate of HIV/AIDS transmission.

Bribe Seeking Policemen Who Rained Bullets On Danfo Bus From Ikorodu To Ilupeju Lagos Arrested
Photo: Victor Essiet Arrested By Police In Akwa Ibom State For Refusing To Show Up At Concert