Residents of the Dubaidna Community, popularly known as Durumi 3, in the Federal Capital Territory (FCT) Abuja are living the fate of abandoned people. Inhabitants of the community maintain that besides electricity supply, the entire community has not enjoyed any other government presence. Distressingly, the community predominated by the Gbagyi tribe (Gwari) is situated behind the Gaduwa Estate and is just a stone’s throw from the affluent Apo Legislative Quarters. Currently, the community has virtually been cut off from the rest of the world due to the dilapidation of a very important bridge that links the community to other parts of Abuja. It was calamity in the community, when a makeshift wooden bridge that was assembled about three weeks ago by the community on the River Dubaidna, following the collapse of a dilapidated bridge on the river, after a heavy downpour rendered the community inaccessible.

According to a regular user of the bridge, Mr Maji Samuel Achemtoh the collapsed bridge has been in a very poor condition for years and has suffered this same faith twice. He made an appeal to government to come to their rescue by providing for them a temporary access route for now pending on when dry season will set in for the construction of a more permanent structure.

The plight of the community was revealed when a representative of the Every Woman Hope Centre, an Abuja based international humanitarian Non Governmental Organisation (NGO) visited the community under the guide of Caleb Dangana (a photographer by profession). In the course of her investigation into this mishap, the representatives of the centre, who paid various visits to community expressed fear during her initial visit that tragedy looms in Durumi 3, as the improvised access bridge cannot withstand major rainfalls of the year. This fear was confirmed on Monday, when the makeshift bridge collapsed. The havoc wrecked by erosion, leading to the over flooding of the river has rendered both bridges on the Kabusa/Gudu road and Kabusa/Kuje road death traps for road users.

It was exactly three weeks ago precisely on the 18th of August, 2014, when the bridge on River Dubaidna, which serves as a major access road for people in that community to other parts of the city, collapsed after being flooded as a result of a heavy rainfall. About eleven people, according to eyewitnesses were feared to have been carried away by the flood as the bridge collapsed. An eye witness, Mr Mike Jonathan recounted the ordeal they passed through on that fateful day of the incident after a heavy rainfall. He recalled that the bridge was almost taken over by water that one can hardly identify the outline of the bridge. According to Mr. Mike, a lot of people were waiting desperately to cross the river but could not due to the volume of water. Finally they decided to move in a chain holding hands and that was when tragedy struck because unknown to them, the end of the bridge has been eroded by water and the bridge itself was too weak to withstand further pressure. This unfortunate group was at the verge of crossing when the bridge suddenly collapsed thereby throwing many people inside the water. According to him he was part of the chain but he quickly ran back when he noticed the break and saw not less than seven people fell inside the river. He said that he immediately called the village head, Chief Bawa Iyah to notify him on what has happened. Chief Bawa according to the eye witness quickly mobilized a team which were able to recue two of the victims on the spot following the cry of help from one of them who was trapped in a bamboo plantation by the river side. Mr Mike confirmed that out of the seven; two lost their lives, two were rescued, two came out on their own, making it four survivors; and one woman backing her baby whose identity remains unknown is still trapped in the water till date. This according to other witnesses brings the number of missing persons to five as they claim that there were about eleven casualties. Among the dead were Mr Lukah Amos a labourer whose family resides in his home town in Kaduna State and Mr Ifeanyi Onyema who hails from Enugu state. Two of the survivors were simply identified as Mr Okeke and Mr Leleh (an Idoma). The missing persons still remain unidentified as the leadership of the community suspect that they are not residents of the area. Besides they are yet to receive any complaint of a missing person. 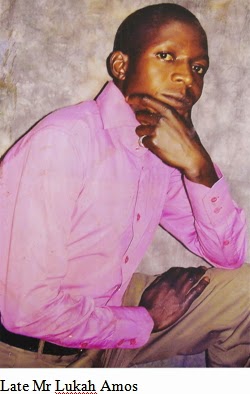 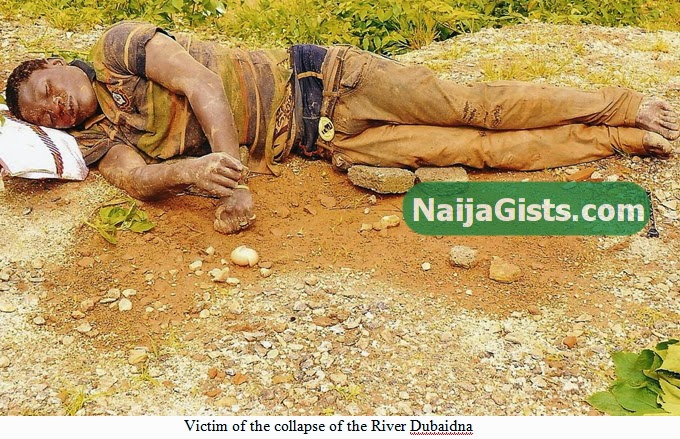 Tragedy once again struck along the Gudu/Kabusa road in the Gudu district of the FCT Abuja, on the evening of Monday, the 15th of September 2014, when one Mr Ephraim Gony Michael from Kaduna state was carried away by water while attempting to cross the flooded bridge of river Dubaidna after a heavy down pour. According to an eye witness the two who were desperate to cross the bridge which has been over flooded with water above hip-level. They were holding hands in a bid to withstand the wave when they were suddenly swept off by the furious flood alongside two vehicles: one 10-seater bus and a Honda ‘Baby Boy’ saloon car. His friend was lucky to be rescued alive as he was wedged in a banana plantation by the side of the river, but he had a different faith. His body was later found on the early hours of the 16th September, 2014 at the bank of the river in Durumi 3. Ephraim who is in the twenty’s was a specialist in automobile wheel balancing at the auto-maintenance section of ‘Oando Fuel Station’, Gaduwa Estate also in Durumi District.
The driver of the bus, Mr. Ifeanyi Akpachiogu and his conductor, Emmanuel Korie expressed disappointment as they narrated their ordeal while trying to save their passengers from the mishap. They lost the two-year old bus to the flood and found the wreckage deep down the bush alongside the river. The owner of the Honda saloon car, Mr Hassan Salufa in his own case passed through a harrowing experience as he lost most of his valuables like cell phone, wallet and a total sum of four hundred and fifty thousand naira (N450.000:00) together with the car to the flood. He lamented on the deplorable state of the road which he attributed to neglect on the side of government and called for urgent intervention from government to save more lives and properties.
According to Chief Bawa who has been the community leader for about ten years, the community witnessed a collapse of the same bridge in 2011 and the bridge since then has been in a deplorable condition. All their efforts according to the chief to attract government attention to their plight have proved abortive, despite the stressed importance and sensitivity of the bridge to the community. He explained that the bridge offers proximity and access to other parts of the city more than other available exits. He maintained that the bridge is situated on a road that served as a major link from Kabbusa through Area 1 Garki, to Kuje; before the construction of the current airport road. He produced a copy of a letter that was written to Abuja Municipal Area Council (AMAC) in 2012 seeking government intervention and regretted that since then, there has not been any response from the government to that effect. 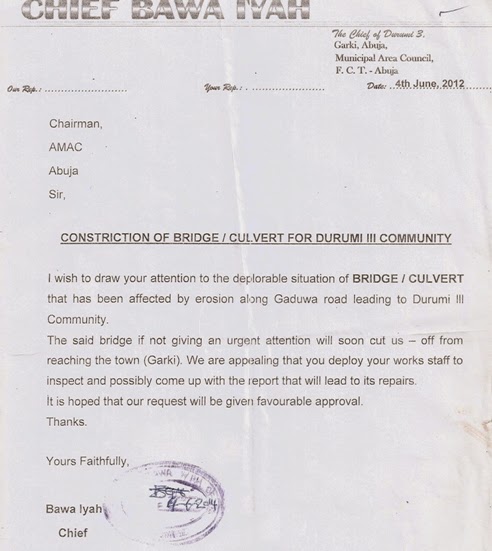 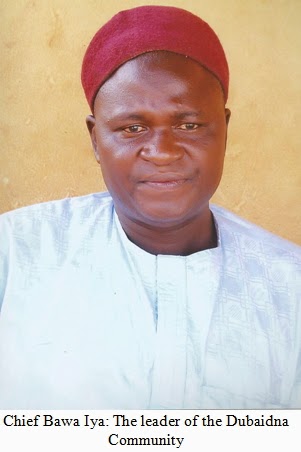 Chief Bawa also stated that the honourable minister of the FCT, Senator Bala Muhammed visited the scene in 2013 with a team and they took some photographs with the minister confirming to them that the road was among the three major road projects then. The minister went ahead according to Chief Bawa to promise that the road comes next after the construction of Gwaganape road, but till date nothing has been done about the road. He also remarked that the current AMAC chairman Honourable Micah Jiba who is also Gbagyi by tribe has equally visited the scene on the 20th of August 2014 and maintained that nothing can be done about the situation at present until the dry season sets in. It was after the visit of the 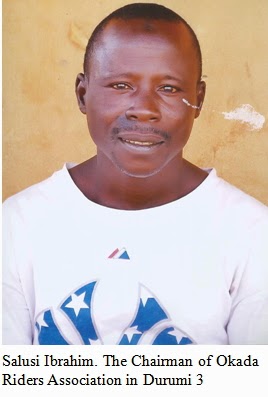 AMAC chairman that disappointed commercial motor cyclists (Okada) Union in Durumi 3 under the leadership of Mr Salisu Ibrahim decided among themselves to fix a make-shift bridge at their own expense. 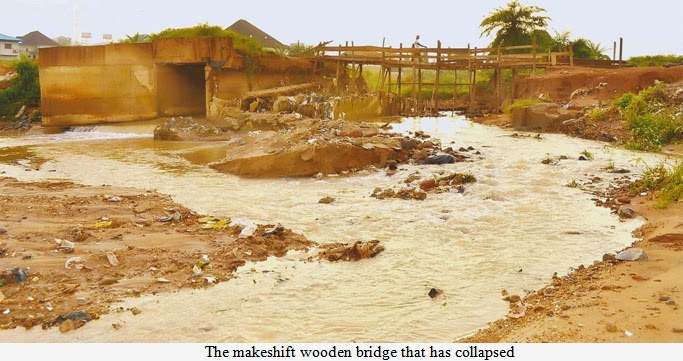 According to Mr Salusi they borrowed a total sum of eighty thousand naira (N80,000) from a man he identified as “Maishayi” (tea man), to complete the makeshift project. He said that they have been able to repay a total sum of fifty-five thousand Naira with an outstanding bill of twenty five thousand Naira, which they intend to raise through a quasi toll-gate. The bridge was constructed with wood, thus, its safety and durability was highly questionable, especially as it was subjected to undue pressure from high Okada traffic and erosion menace it was continuously subjected to. Therefore it was not surprising, when it collapsed on Monday (barely three weeks after its construction). Prior to the collapse of the bridge, Okada was the only means of transport for people in community as the community remained inaccessible to cars due to the dilapidated bridge. Consequently, the inhabitants of the community are usually trapped after any heavy rainfall and will remain incommunicado to the rest of the city until the waters dry up.

Some cabinet members of the community: Mr Ismaila Gwandaba and Danjuma Gandavo as well as a resident of the community, Mr Caleb Dangana (a photographer by profession) unanimously decried the continuous neglect of the community by the government. They recalled that it was the effort of first the Living Faith Church in the locality and later an Estate Developer that maintained accessibility to the area since the 2011 collapse. They alleged that aside electricity supply, the entire community has not enjoyed any other government presence. There is no good water network as the only source of regular water supply in that area is through individual bore-holes. Again there is no provision of either a hospital or a medical centre in the locality to take care of maternal health care amongst other health related issues. The only school within the community known as ‘Durumi 3 Primary School’, was equally achieved through community effort they added.
They used the opportunity of their meeting with Every Woman Hope Centre (EWHC) to appeal once more to Government to quickly intervene and save the Durumi 3 community whose population is over ten thousand (10,000) from the impending doom. Chief Bawa Iyah concluded that the entire community awaits the timely intervention of the government to save the community of an impending doom. 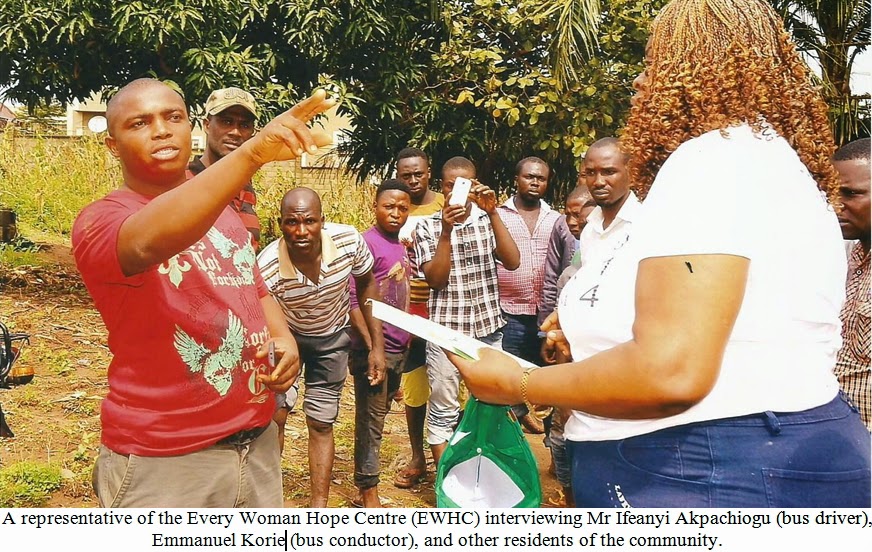 The president of the centre, Mrs Edel-Quinn Agbaegbu is appealing to Government and relevant authorities to quickly intervene and ameliorate the plight of the inhabitants of this community which she described as regrettable, yet very controllable. She advocates for urgent attention and consistent efforts towards the rehabilitation and reconstruction of the bridge while maintaining standard in other to ease the sufferings of the residents. She also added that this will go a long way in giving the people of Durumi 3 encouragement and a good sense of belonging and equally help to avoid the incessant loss of peoples’ lives and properties through avoidable circumstances especially that of our women and children who are the most vulnerable.