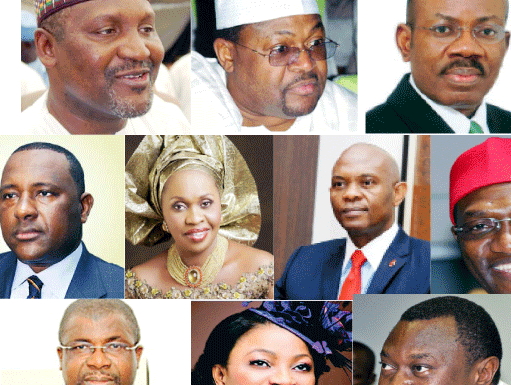 Feb 23, 2018 – How Brilliant Are Nigeria’s Industry Titans ? How Intelligent Are Our Ruling Class?

We do not know how to create a heaven or sustain the like of it but we love to create gods by the dozen. I do not speak of divinity that manifests only in far-fetched miracles and dreams; I speak of individuals we deify as our vanities dictate.

Being rich is the closest you get to being god in Nigeria. Add an impressive root and very intimidating academic record to the mix and you have yourself a 21st century hero or god. Of what calibre are man-made gods? Who really, is the Nigerian idol? Olusegun Obasanjo? Atiku Abubakar? Diezani Allison-Maduekwe? President Goodluck Jonathan? Muhammadu Buhari? Wole Soyinka? Late Gani Fawehinmi?

Do their deeds make them worthy of hero-worship or blind deification? To what would these individuals owe our reverence of them? Some would say it is their brilliance and extraordinary achievements. Anyone could be brilliant from time to time but intelligence is what we have to affect all of the time.

How intelligent are our ruling class? How brilliant are Nigeria’s industry titans – state-made and corruption-activated billionaires to be precise?

By their citizenship, do they provide pathways to empowering the Nigerian youth; the disillusioned jobless graduates and school drop outs of Umukegwu, Akokwa, Urualla, Apongbon, Idumota, Agege, Agbor, Sankwala, to mention a few?

Do they teach the youth to evolve beyond the greed, selfishness and idiosyncrasies of their generation?

Do they teach us to make peace with our guilt and conquer our demons? The answer lies as much in their utterances as their deeds. Transcendent moments and heroic acts are in truth, deeds of an exalted intelligence and unsullied mind, traits that the incumbent ruling class pitifully lack.

Despite our protests and dissatisfaction with the status quo, the Nigerian citizenry equally lacks that towering immensity of intellect and strength of character that remains prime requirements in the constitution of a progressive race.

Our lust for heroes and gods illustrates a fable; it is not of latent strength but disintegration. It reveals the weakness and shallowness of the Nigerian adult’s awfully preadolescent mind. Thus his predisposition to creating gods of impoverishment and war.

Some would say the random hero may pass as god. But the Nigerian hero is a human sound bite. He is essentially a half-formed mammal, animal to be precise. He is hardly humane. He has been flipped upside-down and inside-out; he has been scrambled, corrupted and fertilized by ghastly manifestations of self love, tribalism, wantonness, perverted education and sense of worth.

“All gods are homemade, and it is we who pull their strings, and so, give them the power to pull ours,” says Aldous Huxley, English writer. However, the manner in which the Nigerian electorate worships its ruling class and celebrates its bestiality makes it impossible for the latter to affect the necessary humaneness, tact and humility that are prime requirements of occupants of exalted public office. Having made super humans of them, they begin to delude that they are unquestionable. They parade themselves as gods and see the electorate by whose strength they attained their exalted positions as lesser creatures.

Nigerian idols seek the exaggerated safety and coziness of fortresses they build around themselves to protect their ill-gotten wealth and ostentatious lifestyles, soon after their election into public office. Suddenly, it becomes taboo for them to hobnob with the working class. It becomes abominable for their wives, daughters and cooks to visit the same grocer or shop in the same market as the masses.

They loot public coffers without inhibition and in response, we celebrate them and grovel at their feet for crumbs of what is rightfully ours. Whenever they intrude our world, they leave behind pungent memories and pains. Whenever they come to town, we must be kept in traffic for them to move freely. Whenever they are ‘guests of honour’ at our functions, we are treated with little or no honour. Apology to Kayode Oteniya.

The chief quality of a true leader is the apparent sincerity in his manners. The speeches he makes are never mere platitudinous enterprise and his developmental programmes are never extraordinary elephant projects; his politics and humanity are not only heard but concretely seen and felt.

Really, there is prime merit in everything about him, and his life generally, radiates truth. His life is what we may call a great sober sincerity. A sort of temperate authenticity that is not only blunt but uncompromising.

His fervor is undomesticated, bordering on the wild and forever wrestling naked with the elements that be, for the love of the good and the truth of things. In that sense, there is something of the savage yet humane in him like all great men.

He is one in whom one still finds human substance. He relishes no opportunity to tell any colourful story of himself anywhere; usually, he stands bare and grapples like a giant, face to face, heart to heart, with the naked truth of things. ‘That, after all,” according to Thomas Carlyle “is the sort of man for one.”

And such is the type of man we should value above all others. He is the man who as American writer, Norman Mailer, puts it, would argue with gods and awaken devils to contest his vision. When he dies, his death would be felt nationwide as something more than a historic calamity; women would weep and men would fight back tears as if they had heard of the death of a very dear friend or Saint.

The creation of such honorable man and god would be our noblest work. But we seem incapable yet of such honorable task. We could start by stripping ourselves of the greater vanities and contradictions. Unhappy the land that has no heroes, says Andrea; No, unhappy the land that needs heroes, responds Galileo in Bertolt Brecht, late German playwright and poet’s “The Life of Galileo.” Regrettably, the meaning is lost on all.