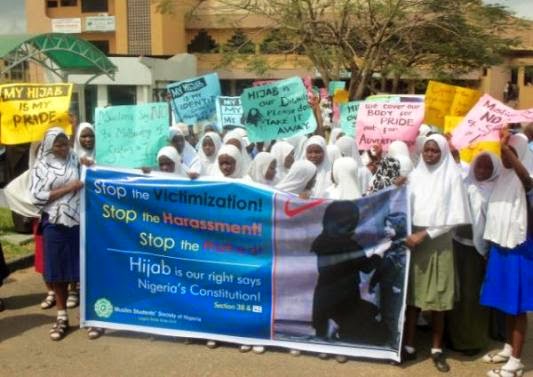 It was a sad development when I first heard that Gov. Fashola of Lagos state has banned wearing of Hijab (islamic vail) in all schools of the state. Been a lawyer and a politician, Fashola is undoubtedly aware of right to religion and personal life.

If Islamic groups that advocate for Islamic states through arms struggle are leveled extremist then surely what Fashola did must be termed intolerance if not blasphemy taking it from religious angle.

Fashola been a Muslim perhaps knows that. Wearing Hijab by females is mandatory as instructed by Allah in the Glorious Qur’an. Likewise in Christianity, covering of the body is compulsory as can be seen practiced by the Nuns.

I was not convinced by the supposed reasons giving for banning of Hijab. Unlike Lagos, in Katsina there is a law that mandated all female students to wear Hijab in schools. This is because of so many reason;

Firstly, it institute morality and values to the female students as they will be mothers in the future to raise family and societies.

Secondly, studies needs focus, mixing of male and female students increase and arouse sexual desires to the students. Uncovered students may tempt their male counterparts and teachers into desires of sexual intercourse with them.

Thirdly, the issue of rape is on the increase both at schools and at large. Indecent dressing, nude exposure and even ordinary exposure of body parts of females has been identified as the number one factor causing rape in schools and in the societies.

Among other reasons, covering of the body by students is a religious duty, sacred and cannot be played with in respect to freedom of religion as enshrined in the Nigerian constitution as amended.

In Uganda, Saudi Arabia, Iran, etc., there is a “national dress code law” that check all indecent dressing in the country. This is because, protecting, advancing, and promoting morality and values is a function of every government in a society.

If for any reason the government think of security issues as a reason to ban Hijab or anything, the government should find a way of removing that threat without necessarily banning what is right, lawful and what is humane.

I call on the government to kindly reconsider this issue before it generates any further unnecessary issues.

Continue Reading
You may also like...
Related Topics:bring back our hijab, governor, lagos, state