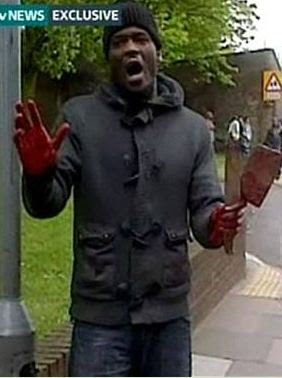 May 25, 2013 – Nigerians In The UK Condemn Killing Of British Soldier In Woolwich, South London

Below is an official Press release by the central association of Nigerians in the UK (CANUK) over the brutal murder of an innocent British Soldier in Woolwich.

There are unconfirmed reports that one of the perpetrators of the violence in Woolwich South East London (yesterday) is a British Nigerian Muslim man. (Both of them now)

If this is true, then the entire Nigerian community (whether of the Christian, Muslim, traditional or and other religious affiliation) in the UK dissociate ourselves completely from this man and his supporters.

The Central Association of Nigerians in the UK (CANUK), the umbrella organization of all Nigerian associations in the UK on behalf of people of Nigerian origin condemn in no uncertain terms the mindless killing of an innocent British Soldier or any human being for that matter.

We refuse to agree or believe that any member of our community will pick a knife to kill an innocent person or settle any score, whether political, economic, social or religious and for whatever reasons.

Violence of any type and lawlessness in any form is not acceptable to us as a civilised community.

We restate that as a very lawful and hardworking community we condemn violence in any form or shape.

Nigerians are known to be hard working and energetic people with respect for other people’s rights.

We commiserate with the families of this soldier and appeal to parents to ensure that they keep tab on their children to prevent them from being brain washed into committing crimes against humanity by those who have points to score against government.

We likewise condemn statements by intolerant, cowardly people indicating their intent to bring violence to London. WE WILL NOT BE PART OF IT! Brave men don’t carry knives. This indeed is not in our character as a people.

As proud British Nigerians we support peaceful coexistence among all people in the UK and in the world and the right for everyone to aspire and pursue a peaceful, prosperous life.