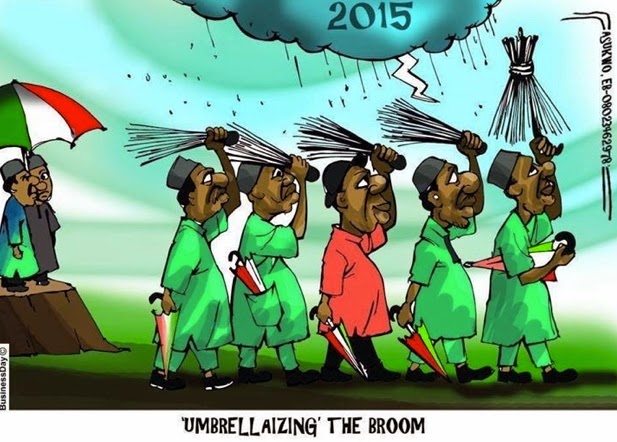 ARMAGEDON: THE BROOMS VERSUS THE UMBRELLAS By Samuel Ufot Ekekere

Never in Nigeria’s political sphere has the struggle for elective positions across her length and breadth been keen as it is today. Since 1999 when our nation strolled into the fourth republic, we have built on our democratic principles and values learning each day on our way up. The winner had always being PDP which had managed to lead the stroll in the pack with their umbrella capable of taking in every one.

Today, we seem to have matured. A new air of political reawakening is roving the political sphere. The seemingly mono party system that had characterized the previous democratic dispensations is slowly but surely giving way thanks to the rise and rise of the APC, the men with the broom.
Now that in-party politics have being done with, the true challengers for political positions are now known. 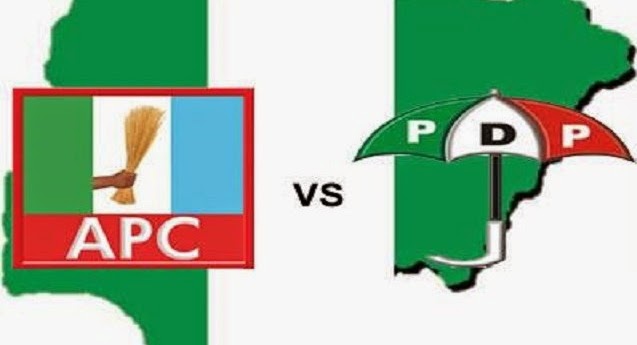 In every local government, in every senatorial district in every state in this great nation, the contestants are readying their ploy for the battle of the Armageddon.
It’s no longer news who the contenders for our nation’s elective positions are, what will be news will be the laughter and the sorrows after that day in February when the results of the elections will be announced. The mathematical calculations had started since some time now, the calculations are ongoing and we expect more calculations that will result at an answer only INEC the master teacher can attest to as correct. Those who are busy with permutations and combinations must be arduous at their task ensuring that no equation is left unsolved.

Already there have being signals of open heavens by our politicians throwing champagnes in the air, doling rice, garri, oil, chicken and more this Christmas with the promise of even more after the election if they win. Some others who fear they may lose and are not ready to spend are threatening heaven and hell if they fail to win like the vote of the ordinary people do not matter. Time will tell how far these will go.

Sincerely, this will be the closest elections ever. This is because the opposition APC was formed from a strong coalition and has being helped with opportunity offered by the men with the umbrella, the PDP, by allowing some part of the umbrella give way thus letting some of its very strong technocrats find solace elsewhere in the APC. The challenge will be tit for tit and tat for tat.

Like two male elephants struggling for opportunity to take charge of a territory, the giant PDP and the evolving giant APC are in for a duel in this battle for Nigeria. Our fear though is the grass, the majority of us amounting to about 199million who don’t really care about what they do up there.
While tactically we watch like spectators, and cheer each side, the game depends on how the politicians play, whether to please us who are watching and anticipating a favorable outcome or their own interest.

There may be some of us who are avid fans, who can give our lives for the party and candidates we support, but most wont. This most may feel sad that their candidates have lost but would accept it all the same because they are aware they can’t truly bank on the promises of “anybody” or “nobody.” Nobody is worth staking life for.

It’s certainly going to be raw with all the predictions and pre-elections threats already ranting the air. The opposition APC is already declaring victory for their candidates as they declare themselves suitable for seats that the incumbent haven’t given up yet while the incumbent PDP are boasting of their intention to add to their seats, that of the opposition.

The stage isn’t set yet, but the contestants know themselves. They know that on that day in February when the stage will be set, they would have had all their weapons in their armory cleaned, updated and perhaps new ones added to defend their cause.
When that rain pours, that one we pray to fall on that day to help wash away the past mistakes, errors and undoing of our past leaders, we hope the umbrella men wont shade us from it and the men with the broom wont sweep it out. We hope it will fall soaking our land and we will all get out into the fields and dance at the new wind of change and prosperity that it would bring.

We know that the change we need does not come by party affiliations. A criminal in PDP won’t change face because he has joined APC. He remains the same old person though with new affiliations, vice versa. It’s like voting out the cabal and bringing in the same cabal though with a new name.
The tactical analysis that even our finest political analysts offer may just be way-way far from the tiki taka win at all cost formulae that characterizes our now modern political game. We know very well the energy and tenacity this new dispensation presents. It is fight to the finish. However way you can win, even if its bloody, just win.

The PDP aren’t taking the APC threat easy and the APC are saying they can prove a point. You may wonder if their calculations are actually correct especially when we have the knowledge that it is the votes of the good people of this nation that must count. One would think that their game plan should be to seduce us the masses into buying their ideas. In the true scheme, the game is who has the most capacity to joggle voter’s card from wherever it would come from into our ballot boxes on that day without the voters noticing.

On both sides, money is already changing hands. Armies of touts are being raised to coarse voters to sell their votes for filthy lucre on Election Day. Already, the plot for the scenes is ready. The actors are being raised and the parties hope that by February they should be ready to play their cast.
For those who won’t bother stepping out of their closet on Election Day, I mean those who are making all the noise now, your fear is understood, the fear of your true voice not counting. With these win at all cost approach that is being developed by these parties, they won’t mind cutting your head off if that’s the one vote that will matter for them. You can afford to stay indoors.

Those who will give their lives are preparing to by now. They will be offered a few thousands to lay it down. We expect that people will die. But for the most that will be privileged not to have the packages of our politicians, we don’t need to think bloody. We don’t need more innocent sacrifice. Our kidnapped sons and daughters that have being used as election sacrifice are enough blood and pain. Just cast your vote and go to sleep.

As the fight slowly and surely becomes increasingly dicey, the warriors we have now are the ones to fight till their last blood. Already, incumbents whether in APC or PDP have assured their senior statesmen of doing all they can to deliver their territories. If indeed everyone manages to keep his territory then we return to the same statuesque as we were before now.
The strength of the challengers on both sides and their supporters is increasingly becoming closer match, money for money, power for power, touts for touts. There is a huge chance of a “casala”. There will be upturns. Some seats will remain with the parties to which they have been, some will be lost and some gained on both sides.

There have been rumors running around of preparations already concluded for the future formation of a parallel government once election results are out and a party does not win. The soldiers to make this happen are already training somewhere I suppose. This would possibly carouse our mind to thinking if this battle is about the people or about the passion of certain persons to rule at all cost.

For the omo jagudas like me, we will lead the free and fair election platoon; we will have our eyes open to watch the guys who want to steal our votes. We will blow them on their jaw and finish them on every side and then return them to their masters the aspirants who have sent them. We too are preparing our massive armory. Na die to finish. We want to hear the voice of true Nigerians. We want to know whoever won was a result of our own choices, our blindness, hindsight, openness, fairness or weaknesses. We are resolute in this battle.

Let’s realize that our individual votes won’t enforce our own candidate but it will count. You might have voted your choice and that’s your choice. Others will have to vote that choice too to ensure the position.

Don’t be blindly lead to your death bed, everyone have only one vote to cast. The guy you may be fighting for may just not be in the country on the day of the election or may be in his underground cabin while you jostle over getting votes for him. Your right is your own single vote. Others have their right to theirs too.
Be wise.

Nollywood Makes Jonathan Grand Patron Twice In 2014 As GEJ Plans To Use Celebrities To Gather Votes
Nollywood Actress Ayo Adesanya On Marriage Crash: I’m Not Looking For Husband Or Boyfriend