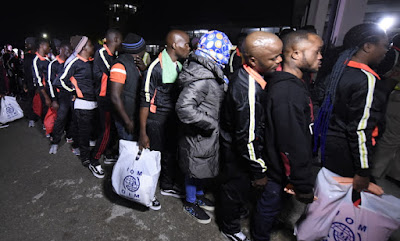 Monday January 8, 2018 – Buhari Apologises To 493 Nigerians Deported From Libya On Sunday, Promises Them A New Life

Buhari’s government formally apologised to the 493 Nigerians who were evacuated from Libya yesterday, over the inhuman conditions and trafficking they were subjected to in that country.

Minister of Foreign Affairs, Geoffrey Onyema, conveyed that apology on behalf of government, to the returnees, in Port Harcourt, Rivers State, yesterday.

The 493 Nigerians were among the 5, 027 Nigerians government had planned to evacuate from Libya, over reports that citizens were being trafficked and made to undergo forced, unpaid labour.

“Young boys, young girls, I would like on behalf President Muhammadu Buhari, welcome you back to your country. As you know, the people of Nigeria, are very concerned about your wellbeing and Mr. President sent a delegation, which I led to Libya. We are sorry you were being held in inhuman and difficult conditions.

We know that most of you were trafficked and sold to slavery. The government will give you a new life.

You will be trained in different skills, so that you can live happily. With all the necessary resources at our disposal, he (president Muhammadu Buhari) ensured we went to Libya to do everything possible to bring you back as quickly as possible.

Among the team which received the returnees were Secretary to the Rivers State Government, Mr. Kenneth Kobani, who represented Governor Nyesom Wike, alongside officials of the Nigerian Immigration Service.

Continue Reading
You may also like...
Related Topics:african, Buhari, migrants