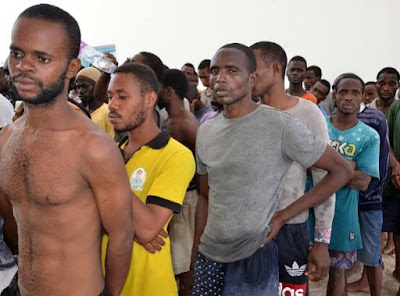 January 8, 2018 – How A Good Samaritan Rescued 20 Nigerian Men Sold As Slaves In Libya After Being Dumped In Desert

Some Nigerians who recently returned from Libya narrated what they went through in the North African country.

The Nigerians gave their accounts in interviews with the British Broadcasting Corporation (BBC), at a hotel in Benin, where they are being accommodated by the Edo State Government.

One of the Nigerian returnees, Agen Akhere, looked like he might well up with tears. He was held for two months in a detention centre in a place called Gharyan.

He was registered by the United Nation’s migration agency (IOM), released from the detention centre and flown home – but his friend did not make it.

Gharyan is a prison in the mountains about 100 kilometres (60 miles) south of Tripoli and it is the place where all of the migrants said they were taken before they made it home.

According to another returnee, Lucky Akhanene, “they came to our caravans (cells), they pick six persons to do their dirty jobs; to do farming, brick-laying work.”

He returned in the same group as Akhere and was held in Gharyan for four months.
“They give us out to their friends. They don’t pay us. It’s just hard labour; if you’re not fast with your job, you get beaten,” he added.

Three separate people spoke about being leased out by the prison for day labour like this.
Others said they were sold.

Jackson Uwumarogie and Felix Efe were arrested “on top of the sea,” off the coast of Libya and taken to Gharyan.

They said one night, a prison guard came and counted out 20 men, took them outside and blindfolded them. Uwumarogie overheard the men talking about a price – 1,000 dinars ($735; £550). They were put into a van and taken to a farm.

Uwumarogie and Efe were forced to work, harvesting onions and feeding cattle. They slept in a plywood hut and were guarded day and night by men with guns.
They were never paid.

Uwumarogie’s baggy tracksuit bottoms hang from his tiny waist and a tight woolen polo neck highlights his skinny frame and slightly puffy, swollen cheeks. He is clearly not well.

On the farm, they were only given food every few days, he said, and sometimes, given sea water to drink.

After six months, they and five others were loaded into a pick-up truck and taken to the desert.
“They dumped us there. It was with the help of God that we found the man that rescued us,” Uwumarogie said.

They were there for two days.

The man brought them to his house and then took them to Tripoli, to meet the IOM.
Stories of black slavery in Libya have been circulating for the past two years. But, the number of accounts heard from recent returnees seem to suggest it has become endemic in the detention system.

And, it is tied to something that has been going on for much longer: a dark but thriving industry in which migrants are extorted for money by traffickers and prison guards. Wrists tied with barbed wire.

Fulani Herdsmen Killings: An Open Letter To President Buhari
Buhari Apologises To 493 Nigerians Deported From Libya On Sunday, Promises Them A New Life