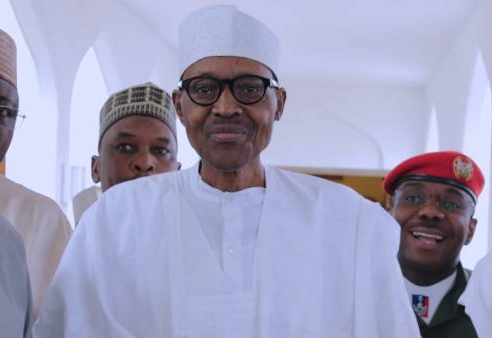 Mr President was not allowed to see his wife, Aisha, during her recent visit to the UK, presidency sources have disclosed.

In the stunning disclosure, the sources affirmed to SaharaReporters that the president has been kept away from several of his aides and even those bodyguards who supposedly travelled with him.

The President’s Chief of Staff, Abba Kyari who also frequents London to take care of himself, is still the manipulator-in-chief, according to the sources.

Furthermore, SaharaReporters learned that Mr. Buhari has not spoken to Acting President Yemi Osinbajo for several weeks following his departure from Abuja for a second round of medical treatment for an undisclosed medical condition suspected to be cancerous brain tumour.

The sources gave the example of Wednesday last week when members of Buhari’s cabal called the Acting President and asked him to await a call from the ailing President, pointing out that no such call was received except one that was just a few seconds of hellos before the person hung up the phone.

SaharaReporters also learned that the public declaration by Orji Uzor Kalu, a former Governor of Abia State, that he met Buhari in London is a complete fabrication as Buhari did not at any time receive Kalu, who recently decamped to the president’s All Progressives Congress party.

One particular presidency source told SaharaReporters they suspect Kalu was using that gimmick to intimidate the judge who is trying him for corruption, considering that he wore a turban to court a few days later.

Our sources confirmed that Buhari is incommunicado, and is only reached by two aides, Tunde Saburi and Sarki Abba, who have maintained stoic silence about his condition.

It is notable that when Mrs. Buhari returned from her recent trip, she sent messages to her family members in Adamawa claiming her husband was recovering fast but asked for intensification of prayers.

Mr. Kyari is said to be in charge of all the behind-the-scene moves. It was he, they claimed, who a few days ago passed a fake document to Garba Shehu, one of Buhari’s spokespersons, claiming that Buhari had given Osinbajo the go-ahead to sign the 2017 budget.

According to their account, Osinbajo had already decided on the date he would sign the budget, a decision that was delayed only by a last-minute discussion to include some projects such as the Lagos-Apapa Port road repairs. They said they were not surprised at Mr. Shehu’s fake statement claiming Buhari sent a letter granting the Acting President the right to sign the budget.

Buhari is said to be rather unaware of his environment, his memory somewhat affected. For instance, on his way to the UK, he was said to have asked if he was on his way to Sokoto.

Our sources said that the cabal working with Buhari might bring him back the same way he was returned in February, in a scheme to use his presence to perpetrate more fraud and control power.