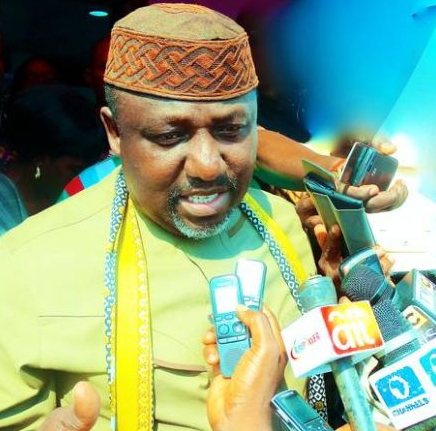 Yesterday Okorocha reacted to the quit notice served on Igbo living in North by some Arewa youths and the consequent reactions by pro-Biafra groups.

He said the “so-called” sit-at-home order by IPOB, which might have triggered the controversial quit notice, was not observed by the Igbo as generally believed.

“We never supported the sit-at-home as believed. What happened was that the sit-at-home order came a day after the May 29 public holiday and knowing our people who also love to extend their holiday over any slightest opportunity decided to stay at home for one extra day. Then most of the traders closed their shops for fear of hoodlums who might want to take advantage of the situation to loot their goods”.

“These agitations are nonsensical and I condemn them in entirety. We should not be talking about another state within a sovereign state, all we need to do instead of talking about Biafra and MASSOB is to push for the economic emancipation of the Southeast. I know what they will expect me to do as a governor, is to encourage the Biafra agitation and ask our people to prepare for war. But I will never do such thing. I will never support any call to divide Nigeria.

Okorocha blamed Nigerian leaders for the growing spread of hatred among the youths.

“We have failed as leaders to instill love in our children. It is about time we took responsibility as leaders to end this threat to our unity. We should not transfer this hatred to the next generation”.

He warned the Igbos against agitation for Biafra, saying the South East couldn’t afford another deadly civil war.