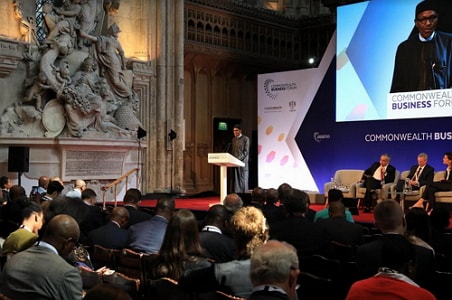 “The world is changed by your example, not your opinion”-Paulo Coelho

There is a Yoruba adage that says, “A man that sells his relatives cheap in the market place will be unable to re-purchase them in times of scarcity”(Eni to ba ta ara ile re lopo, kole rira boba dowon). Over the past few days, there has been a heightened tension as a result of the president’s recent utterances at the Commonwealth Business Forum in London on April 18, 2018. An international forum that was supposed to be a platform for the president to showcase the opportunities that abound in Nigeria later became a session to take the Nigerian youths to the cleaners.

It was so sympathetic that a platform that could have been used to market the nation ended up portraying some Nigerian youths as invalids and national liability.  While some Nigerian youths were busy hustling and working hard to eke out a living, the president was furiously pouring vituperations on the Nigerian youths. The president’s utterance at Westminster has elicited various responses and reactions with the president saying that a lot of the youth just want to sit down and do nothing, banking on the notion that Nigeria is an oil-rich nation. Though, the presidency refuted the wrong notion by saying that the president was just referring to some and not all the Nigerian youths but my question is: Why must you talk about few lazy Nigerian youths when you should have projected the others that are very industrious, hardworking and innovative. Every president and country representative came with their challenges and problems but they know too well that the platform is too expensive to de-market their countries by focusing on a trivial few. If I can vividly recall, Vice-President Yemi Osinbajo was in Lagos recently to inspect tech companies owned by Nigerian Youths!

Benjamin Franklin once said, “I never knew a man who was good at making excuses who was good at anything else”. Your Excellency sir, with all humility, you give more excuses than you accept responsibilities. Infact, I can barely remember seeing your government taking responsibility for anything! You were elected not to give excuses but to take responsibilities. The recipe for a failed state is for the leaders to always look out for excuses. Your Excellency Sir, finding excuses demeans your exalted office.

President Muhammadu Buhari, DON’T FIND FAULT; FIND REMEDY! In life, it is impossible to consistently give excuses and still make results. Gabriel Meurier once said, “He who excuses himself, accuses himself”.

Nigerians are actually aware of the failures of the past governments and that was why the last PDP-led government was voted out massively. We didn’t vote you in Sir for excuses, you were voted to take actions. Your penchant for excuses has seriously encroached on your electoral value to the extent that Nigerians are always waiting for your next excuse! The only thing complaining does is convince other people that you are not in control.

Mr President Sir, have you ever wonder why Nigerian youths make it everywhere in the world except Nigeria? Give a Nigerian youth a project to handle in the right atmosphere and see it done immediately – this is proven world-over. There is a young Nigerian kid in the U.S by the name Zuriel Oduwole who has actually interviewed up to 25 Presidents around the world including yourself but I can assure that if Zuriel had grown up in Nigeria, she would probably have been hawking pepper in Mushin, selling bread in Agege, begging for alms in Sokoto or probably selling wares in Onitsha! Mr President, it is not the Nigerian youths that is the problem, it is obviously the Nigerian environment. The main responsibility of a sane government is in creating the right environment, which your government has consistently failed over the years to achieve.

Have you ever gotten the ludicrous number of millions of Nigerian youths visiting job searching websites every hour? You can easily visit Jobberman website to see this staggering number! Imagine the young Nigerians behind the On-line job searching site-jobberman. Jobberman, is a Lagos-based, pan-African online job search engine that was started by three young entrepreneurs – Ayodeji Adewunmi, Opeyemi Awoyemi and Olalekan Olude – during their last year of university. One of the core responsibility of the Ministry of Labour and Productivity should have been to help graduates and young Nigerians find their match of job in places they never knew such opportunity existed, but these brave young Nigerians have taken up the responsibity to fix the lapses in the Nigerian system.

Leaders don’t pass the buck, they take full responsibility! Your Excellency sir, one of your overzealous electoral promises when you were campaigning for votes is that you will give every unemployed youth a stipend of five thousand naira each every month, a promise you later renege on but none of the Nigerian youths is protesting in the streets for your failed promises. You stained your integrity by making a U-turn on an electoral promise that brought you to power. You cheated the Nigerian youths on many fronts, and can still remember the young man that trekked from Lagos to Abuja as an expression of hope in your government!

Who is truly lazy Sir? When herdsmen were on their killing spree in Benue State and all other parts of the country without a unified security intelligence that could promptly checkmate the killings and protect innocent and hardworking citizens. The real lazy people are people that make money from government without solving problems. Who is truly lazy? A Nigerian government that is over suffocated with different kinds of security agencies, yet 3-5 unarmed men grabbed a mace in the National assembly?

Several youth summit reports have been submitted over the years to the Ministry of Youth & Sports Development without any significant feedback on government interventions from African most docile youth ministry ever. It is very obvious that the Ministry need serious restructuring as the present Minister has no concrete blue print for the Nigerian youths.

The Nigerian youths are not liabilities, the real liabilities are leaders at different levels that cannot solve problems. Every youth must work hard to get their PVC. If #BBNaija was able to get 170 million votes (mostly from the youth) we can vote in a youth president next year. Just go and get your PVC!

Finally, to the Nigerian youths. Don’t allow anybody to despise your youth. Your value does not decrease based on someone’s inability to see your worth. Don’t ever allow someone else’s opinion to become your own reality. You may succeed if nobody else believes in you, but you will never succeed if you don’t believe in yourself. The search for self-worth doesn’t begin with what others are saying about you; it begins by looking inward and finding out ways through which you can be a blessing to your community.

QUOTES OF THE WEEK: “I have never let anyone talk to me into not believing in myself”-Muhammad Ali

Buhari: An Analog President Cannot Lead A Digital Generation. It Is A Psychological Mismatch & Aberration Of The Highest Order
Codeine: A Syrup That Is Wiping Out A Generation Of Youths