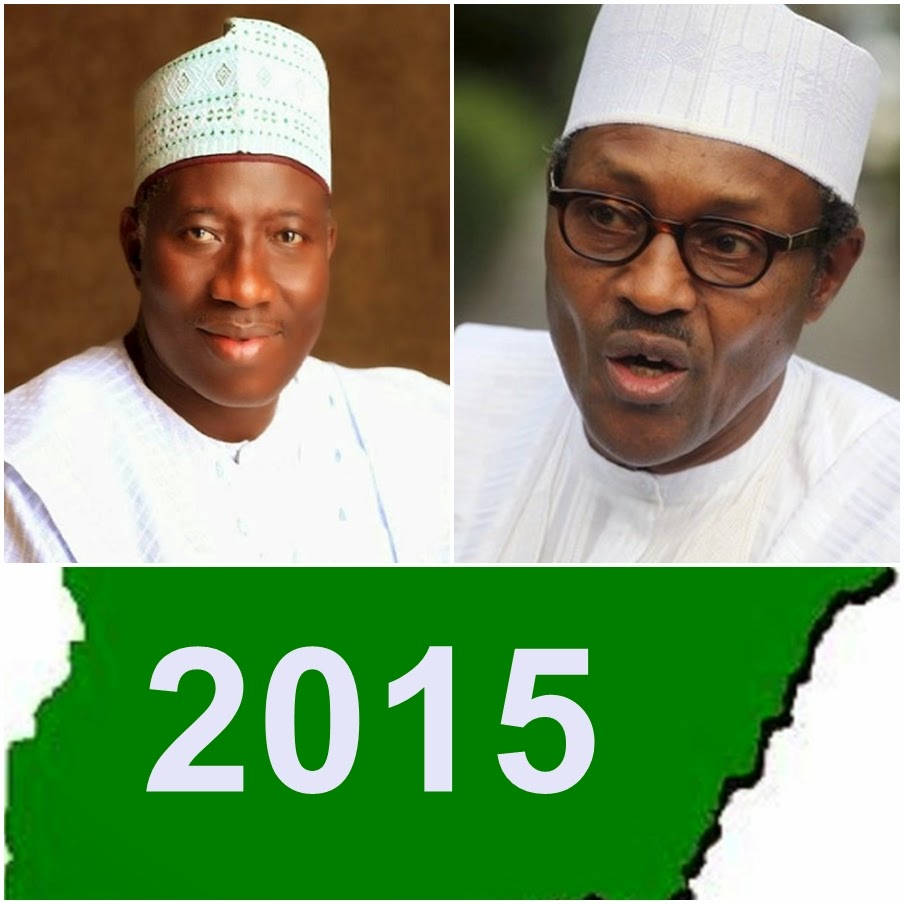 Jan 30, 2015 – February 14 Nigerian Presidential Elections: Buhari , Jonathan, APC Or PDP Not The Change, The Change Starts With U, Vote Wisely

The defining moments of Nigeria’s future will be in a couple of weeks. Political jamborees are already heating up. Brooms and umbrellas are currently the most popular objects on our streets. Men and women are making claims to one political affiliation or the other in a bid to also benefit from the huge money fallout that’s the characteristics of the modern political arena. In most states, calculations are increasingly becoming more complex as political students try to decipher what solution will be offered in February’s elections.

Former president Olusegun Obasanjo has recently offered his voice on how Nigerians should vote as he finds his path to political prominence. He said “vote for candidate not party.” Most Nigerians are not politicians or political players. They, though, are expected to help define the game by the candidate they vote. To be candid, Nigerians often define their political views by the general mental state of the nation.

Everyone’s talking about Buhari so why not myself? Or it’s Jonathan all the way, and I can follow the band wagon. There is a difficult thin line that Nigerians have to break through to define their thought pattern.

The new wave of political re-awareness springing across the nation springs from a need to connect to the general wave of happenings at the centre. Nigerians though need change; we seem scuttled in the thought that change assumes the face of a person or party. Change necessarily does not arrive because we have the candidate we want. Buhari or Jonathan isn’t change neither is APC or PDP. Nigerians are change. When our mentality as a people is directed towards a new ordered direction, we may certainly be finding a strong voice in seeking and propelling that change that we so need.

One real deal for Nigerians is the now responsibility that we are beginning to bear about the direction this nation has to thread. It’s good news that Nigerians are beginning to give their voice on paramount issues that affect them. Rather than sitting and waiting for that good man who we think has the big heart and capacity to rearrange and reorder this nation, we can afford to begin the rearranging process by ourselves. We need even more now, for Nigerians to raise their voice high beyond these elections and question every action taken by any and every government in the good light of the people.

As electoral processes become increasingly more open and transparent, Nigerians must wake up to take decisive positions on how and to where this nation will be guided. The quality of our leadership will be determined no longer by cabals or prearranged power transfer. It will be determined by the performance of those the people have confidence upon, a system developed in which the people can decide even before the tenure of the government is over. Nigerians who think they have the quality to lead this nation will thus have the freedom to present themselves and beckon on the people to have them voted.
Another real deal is the increased credibility that our future political aspirants will be expected to have.

Thank God, recent political displays between the two presently contending giants have revealed so much on each side that Nigerians may never have known. In a competitive political atmosphere, that’s the way it should be. On each side, each candidate must prove beyond every doubt that he has clean records and no bad or negative history. Though Nigerians may not care about what varying opinions or revelations might have arrived against their purposed aspirant of choice like present ongoing online polls have show, a time will arrive when this will matter like it does in America and the western world.
While Nigerians are presently assuming that one candidate is the real deal over the other, we are being blinded or overly giving ourselves to the same illusions that had covered us for so long a time. We still assume that the prolific nature of our political aspirants is what we need when sadly, that’s not what we need.

What do we need then? Well, we need something more that our political aspirants may not be able to offer us by themselves. That more arrives from us. The satisfaction we may be craving for only arrives from our interaction with the powers that be and our determination to ensure we get from them, not what they can offer as it’s the order now, but what we as a people expect from them.
The real deal then is that we have a blueprint as a people, an agreed defined future which we expect to see come through. That blueprint is what we measure the performance of our political aspirants with. By this, we take away the power from those who had seized it and it becomes everyone’s. As a people, we can afford to say, “if you are certain you can give us this, go ahead and if you don’t, we kick you out.” The yard stick for the measurement of performance of our political appointees or politicians becomes ours not those to whom we give power to.

The popular dictum “vox populi, vox dei, voice of the people, voice of God” may seem very popular in the vocablary of Nigerians especially politicians. We as people know that the voice of the Nigerian people do not hold water. It has always being silenced at will by our power drunken politicians. When we get the real deal, we can stop the abuse, shut the mouths of those who have made themselves gods ahead of the people and get dignity too.

Whether they are known as cabals or whatsoever, we have the power to displace them. A group of ten cannot outdo hundreds of millions of people. Get it? Think of it. Are the candidates being offered us our choice? Are they not the puns of our underground cabals? Yes, we seemed determined to vote in some person who would naturally not do our bidding because he remains answerable to the cabal who placed him there in the first place.

When as a people, we are positioned to find, raise and support our representatives to elective positions, then can we truly say we have a government of the people, by the people who we also hope will work for the people. Our commitment to defining change our way will arise beyond party ideologies or personal interest.

Those who have Nigerian interest at heart must begin to see not just the short-term benefits of their political affiliations; they must begin to task themselves on the future benefit of their today and after-today actions.

Nigerians do not just need change, they have to be change. That’s the real deal.