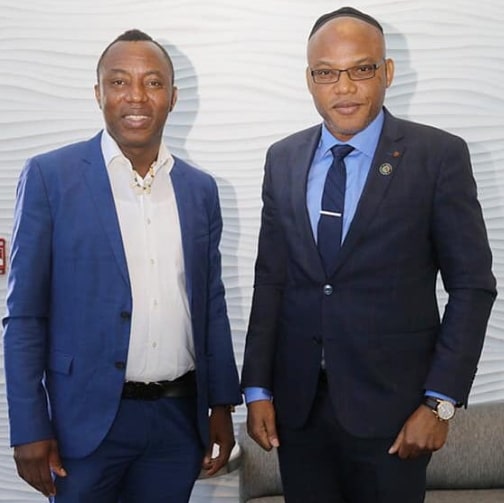 Buhari Under Fire For Ordering DSS To Arrest Omoyele Sowore

Former aviation minister, Femi Fani-Kayode has taken a swipe at President Muhammadu Buhari over the arrest of activist and politician, Omoyele Sowore, describing him as a coward.

FFK while reacting to the arrest said every Nigerian had the legitimate and constitutional right to protest and demonstrate peacefully in a democracy, saying it is not an act of treason to march against the President and to protest about the insecurity in the country.

According to him, Sowore, expressed his desire to demonstrate peacefully against Buhari and his government and chose to call his protest a “revolution” in order to emphasise his zeal and the importance of the event.

“He has no arms, he has not threatened to conduct an armed struggle or engage in an armed insurrection or to kill anyone so this can only be a “revolution” in name and by words. Yet you (Buhari) are such a COWARD, you are so timid and you are so fearful of your own shadow that you storm his home in the middle of the night, arrest him and threaten to charge him and his supporters with treason if the demonstration holds.

“Meanwhile various murderous northern supremacist and hardline Fulani extremist groups, all armed and “fully loaded”, have stated their intention to kill every southerner in the north unless and until RUGA is accepted and implemented in the south.

“They are filled with hate, they have arms, they are racists, they are ethnic supremacists, they have a publicly-stated murderous intent and they have already killed many in the south, the Middle Belt and even in the north itself yet you did not see fit to arrest even ONE of them or declare them as terrorists.

“The only thing they have are their words, their feet, their hands, their pen and the courage of their convictions yet you are so intimidated by them and so frightened of them simply because you cannot bear to be exposed for what you are. You silenced and clamped down on the official opposition, on IPOB, on IMN and on all the civil rights groups but you bow and tremble before the Fulani herdsmen and covertly protect and support them whilst you pamper Boko Haram, secretly empower them and fight against them with kid gloves,” he said.

“So did my friends and brothers Mazi Nnamdi Kanu, Governor Ayo Fayose, Lt. Colonel Abubakar ‘Dangiwa’ Umar (rtd), Pastor Bosun Emmanuel and a few of our fathers in the Lord like Bishop David Oyedepo, Pastor Ayo Oritsejafor, Prophet T.B. Joshua and a number of others.

“It would have been a harmless exercise, with relatively small numbers and an opportunity for the activists that often collaborate with Sowore to come out and express themselves. It would have begun and ended there without much drama and rather like the harmless protests about the Chibok girls at Unity Fountain in Abuja. There is not a hope in hell that it would have turned into a violent attempt to overthrow the government and, as far as I am aware, neither was that ever the intention,” he said.