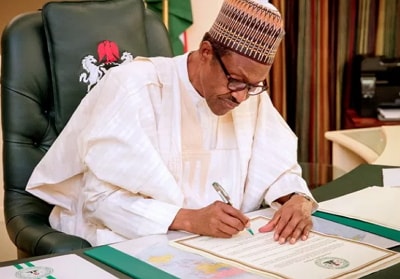 ABOUT a fortnight ago, President Muhammadu Buhari, summoned all the security chiefs to Aso Rock villa, where he gleefully, categorically and unambiguously announced to them that he had approved the sum of US $1 billion for the procurement of military hardware to strengthen the armed forces to prosecute the war against insurgency in the Northeast more effectively. This announcement, which was made in the full glare of TV cameras and broadcast nationwide, elicited a deafening and rapturous applause from the security chiefs present.

Responding on behalf of all the security agencies, the Chief of Army Staff, Lt.-General Tukur Buratai, obviously beside himself with joy, expressed his unstinting gratitude to the president, assuring the latter that the money would be spent judiciously for the purpose for which it was approved. As far as the president and the security chiefs were concerned, it was “c’est fini”, a fait accompli: the next step was the chiefs to begin to withdraw the approved money from the Excess Crude Account (ECA), a controversial creation of the former, much maligned ruling party, the People’s Democratic Party (PDP)!

But then a cacophony of criticisms and unabating furore erupted everywhere in the country about the unilateral, unconstitutional and illegal approval by the president of such a humongous amount, any amount, of money, not in an Appropriation or Supplementary Appropriation Act.

Inveighing against the presidential appropriation of such a colossal sum of money for the purchase of military hardware less than one year before the general elections, the main opposition party, the PDP, said its investigation revealed that the presidency deliberately avoided the National Assembly to avoid legislative scrutiny and accountability, thereby paving the way for the diversion of the fund “for partisan purposes.” Not a few lawyers vociferated blue murder, and then the National Assembly started threatening fire and brimstone. The provisions of the section 43 of the Constitution of the Federal Republic of Nigeria, 1999 (as amended) on impeachment might be invoked! Excruciating furnace heat!! And the presidency was forced to make a painful volte-face.

One of the senior advisers of the president fulminated against the impatience of Nigerians: “No”, he said, “approval doesn’t mean approval; if the critics were patient enough and had asked the Senior Special Assistant on National Assembly Matters, they would’ve known that the request for the US $1 billon was on its way to the National Assembly!”

At this point, some gnawing questions are thrown up: Does the president summon all the heads of the MDAs for meetings to announce his approval of executive Bills that are on their way from the presidency to the National Assembly for consideration? What elicited the excitement of the security chiefs about a Bill that what yet to be submitted to the National Assembly let alone considered and passed by that body? Or were they convinced beyond doubt that the National Assembly would simply rubber-stamp what the president had approved? Does presidential approval precede parliamentary consideration and passage of a Bill and presidential assent? Can’t anyone in the presidency see that the president had placed the cart before the horse? Why the humongous sum of US $1 billion (or about N.36 trillion) for military equipment to combat Boko Haram insurgency that was “technically” and later “completely” defeated over two years ago? Or are these powerful adverbs merely the effusive concoctions of an inveterate popinjay?

Section 82 of the constitution empowers the president to authorize withdrawal of moneys from the Consolidated Revenue Fund of the Federation (not from the ECA) for a period not exceeding six months if the Appropriation Bill in respect of any financial year is not passed into law by the beginning of the financial year. Is the procurement of military hardware with US $1 billion in the 2018 budget? Did the presidency imagine that his powers to authorize withdrawal of moneys from any of the public funds, such as the ECA and the Sovereign Wealth Fund (SWF) equate with the powers improperly conferred on the president by section 305 (1) (2) of the Constitution to issue a proclamation of a state of emergency before informing the National Assembly via the official Gazette of the Federal Government in which the proclamation has been published?

Section 162 (1) of the Constitution provides that all revenues collected by the federal government shall be paid into “the Federation Account” (FA), and in subsection (3) thereof, such revenues “shall be distributed among the Federal, State and Local Government Councils…” It stands to reason, therefore, that, if some revenues which ought to have been paid into the Federation Account are deposited into some other public funds, such as the ECA and the SWF, all such stray revenues belong, not to the federal government alone, but to all the three tiers of government. Ipso facto, any withdrawal from such a public fund must enjoy the concurrence of the National Assembly, all 36 State Houses of Assembly (not of caucus of the 24 governors of the ruling All Progressives Congress (APC) and of the 774 LGAs. In any event, the National Assembly must be involved in the appropriation of public funds. Section 80 (4) of the Constitution is emphatic that “No moneys shall be withdrawn from the Consolidated Revenue Fund or any public fund of the Federation, except in the manner prescribed by the National Assembly”.

Sections 4,5 and 6 of the 1999 Constitution of the Federal Republic of Nigeria (as amended) enshrines the doctrine of separation of powers among the three arms of government—the legislature, the executive and the judiciary. Section 81 (1) (2) of the constitution allows the president to prepare an Appropriation Bill, including all the heads of expenditure (other than expenditure charged upon the Consolidated Revenue Fund). One wonders why the US $1 billion request was not included in the Appropriation Bill sent by Mr. President to the National Assembly about five months ago. Or should that amount of money and the president’s express, even though unconstitutional “assent” thereto be read into the meaning of a Supplementary Appropriation Bill, which he impliedly passed into law by his public approval thereof?

At this stage of our socio-economic, political and cultural development as a nation-space, with a written constitution, it is imperative that we insist on the rule of law as a guiding principle and be vigilant lest we unwittingly allow the surreptitious ingress of autocracy, the very antithesis of democracy, into the body politic. There is need to be alert and stand solidly as watchdogs to watch the activities of any ruling political party so that we are not dragged into a bottomless abyss of chafing autocracy and noisome authoritarianism. Nigerians had haplessly endured military dictatorship for over 30 years of its chequered history. The rule of law and the due process of law must not only hold sway but must be seen to do so! It is also important that all the handlers of this and any other president should meticulously study any situation (be it in the socio-economic, financial or legal realm) before allowing the president to plunge into it to his or our detriment.