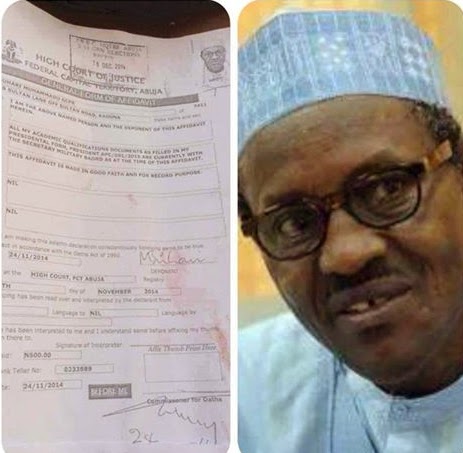 WE ARE NOT WITH BUHARI’S CERTIFICATE, ARMY TELLS BUHARI

Over the past days, news of APC presidential aspirant Gen Muhammadu Buhari’s submission of an affidavit to the independent national electoral commission INEC about his original credentials being with the military had gone viral on internet media. This came in reply to the PDP ascribing him as “semi illiterate”.

The army has stated that she does not have in her possession certificates of serving or retired officers or soldiers in response to the retired general.

The army only keeps photocopy of credentials of officers and soldiers in their personal files at the army secretary’s office.

In further explanation, the source revealed that original certificates are only needed at the time of entry into the force either through the cadet or recruit as proof that the photocopy presented are correct.

Such claims of original certificate being with the military secretary are false.

Sources from the opposition party alleged that Goodluck Jonathan has partnered with the Nigerian military to disqualify General Buhari from 2015 election.