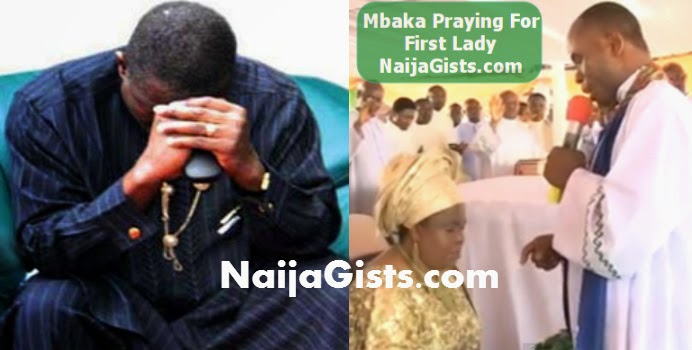 Here is the full transcript of Catholic Reverend Mbaka’s New Year’s eve message delivered at the Adoration Prayer Ground in Enugu on Thursday.

He claimed that President Jonathan is not a bad man but he is not competent to lead Nigeria.

See the full transcript of his message made available by Premium Times below:

In the year 2014, we had a lot of bloodshed in this country. People were dying like rats without anybody asking about them. This country suffered a lot of blood experience. Many of us witnessed that people were in tears. Just like the ancient world, the year 2014, the 4 in it had the queen in it, which had to do with death. Our leaders failed us with reckless abandon and nobody asked them question.

The so-called democracy was a hidden autocracy. It was deceptive and questionable quack miler. Nigerians suffered hunger unnecessarily. We heard about oil subsidy being removed and added, whatever be(is) their jargon, nobody understood them. We heard about minimum wage, the civil servant suffered, the minimum wage was not paid and we were all calm. In 2015, Nigerians will not be calm again (shouts of AMEN!).
We need change. Whatever it will be, let it be. This is my golden message to my beloved country. What actually is happening (Ogini nne me?). The multitude of our youths, the quality young men, quality young women, brilliants youths but nobody has plans for any of you. Our so-called leaders should come and apologize.

By the grace of God, by the power of the Holy Spirit, we are announcing spiritually, change! 2015 should not be a year of any hooligan maneuvering to hijack power. This is our New Year message. Listen, when you go home, tell anybody you see that from the oracle of the Holy Spirit, we are announcing change (AMEN). Can somebody help me to shout change (shouts of change by the congregation) in Jesus holy name.

My message is in two branches (folds). Number one branch, the theme of this first message to my fellow countrymen is from good luck to bad luck. Once upon a time, the whole countrymen were crying for a leader who will help us move forward with our economy, have an authentic democracy, give our unemployed youths jobs, enable our power to be steady, who will industrialize Nigerians, who will encourage mass education and agriculturalize Nigeria. Having in view that oil will soon drop, give us security in a maximum level. By the grace of God, there emerged a Goodluck, all of us were happy, the Goodluck met Yar’ Adua and Yar’ Adua died. May the Holy Spirit help me as I utter this message, I know many will misunderstand it, but it will stand the test of time and you will know I’m speaking the truth.

As I’m speaking with you, most of our civil servants did not celebrate their Christmas. The Christmas season that should be a Goodluck time became a bad luck time for our Nigerians forgetting that very soon, from 3rd January, the children will go back to school and the parent are going to pay school fees. From where? Are they going to use their urine to pay? (Shout of NO from the congregation). But where is the good water even if they are going to use their urine. Are they going to use their stool to pay the school fees of their children? (Shout of NO from the congregation). You have to eat well to defecate.
What is the fate of our children? Tears fill my eyes when I see our young graduates hoping and walking our streets. What is the meaning of kidnapping? Kidnapping is the grandson of unemployment. Boko Haram is a grand great child of the same unemployment, mass looting, and poor governance.

I’m not saying that Goodluck is a bad man. He is a good man. But he cannot lead Nigeria. As things stand right now, from the oracle of the Holy Spirit, Jonathan should honourably resign quietly and let Nigeria be. The destiny of Nigeria is greater than Goodluck Jonathan. The Goodluck in Jonathan has become a bad luck to Nigerians. Whatever brought him in should send him back and let Nigeria be.
By this time in few months to come, many are going to lose their jobs and there is no alternative. During election, Jonathan will answer Azikiwe, Ebele and become an Igbo man and after election, the Ebele, the Azikiwe and Goodluck will vanish from his identity. Who is fooling who actually?
Look at our federal roads, we are not even asking for new ones, roads built by Buhari and Babangidas — the so called Hausa people— cannot be maintained. Follow Enugu here to Onitsha, children born some years ago do not know that there was a lane along the other side of Isiagwu and we are all saying continue. The continuity of Jonathan means disaster to Nigeria.

We need change. May the Holy Spirit help me to vocalize what he has shown to me while I was waiting on him to give me a message for my people? I’m worried about the future of you my children. Go to school, go to school, mention any government school functioning in Nigeria now? Our schools are dilapidated. Nigeria is like an egg about to break in the hands of Jonathan Goodluck and we cannot allow it to happen. It is so unfortunate that pastors are becoming vultures around the president. Pastors are becoming hawks around him, eating the porridge of Jacob and selling their prophetic rights. And anointing is being merchandised in Aso Rock, carrying our nairas, turning it to dollars and carrying it in jets moving out of the country.

Listen, this is the voice on the pulpit: all these men of God, who are telling Jonathan to continue because they are benefitting one thing or the other, you should question your apostolic, prophetic anointing. What the Bible say is that Samson did not know that the Holy Spirit had left him. Let them watch if the Holy Spirit is still in them.

Listen, they will begin to tell us this one is a Christian the other one is a Muslim. I don’t believe in that. Who is a Christian more than Judas? Did Judas not betray Jesus? Judas was not just a Christian, he was not just a mere apostle, he was a super apostle like a cardinal but at a time he messed up and Bible says his office, let another take. That is the normal thing.

The way Nigeria is going right now, the office of Goodluck Jonathan let another take. I’m not campaigning for anybody. I’m filled with tears over what is happening in Nigeria. Some of us who have nongovernmental organisations funding charity, I know what I’m suffering. The more they are looting our resources, the more they are rending you unemployed, the more some of us suffer the more. If I have been paying for the school fees of 500 people, it would now jack up to 3000, or more.
What the government should do, individuals are struggling to achieve. When there is no road, no power, all this fake promises… where is the power? That Onitsha Bridge, has it now been built? No. After 6 years, and Goodluck has what it takes to do whatever.

He surrounded himself with hooligans. By the time he comes down, he won’t have anybody to work with. He played himself into the hands of hooligans.
My interest is about the wellness of this country. Nigeria must survive what we are passing through by the help of God. The same God who saved us from Ebola will save us from this bad luck season (shouts of AMEN from the congregation).

Look at it, there was a time there was an argument about pension fund – such billions. Who is talking about it now? Billions and we were hearing it… from excess crude oil money, where is the impact of the excess crude oil money? Now from oil boom, it has met a bad luck; it’s now oil doom. If my father will be my leader and my siblings will all die, let a stranger be my leader and let my family be. All I’m trying to tell you is that we have not entered into any covenant with anybody.

Last time, the First Lady came here. We are not partisan; we welcomed her. We did a spiritual drama here. Lifted four birds to fly up, the main one that should fly up refused to go. I did everything possible and that one is the healthiest of them all but refused to fly and the spirit of God said, don’t disturb him.
When God rejected Saul, David took over. Let me tell you, in the history of Nigeria, we have never experience bloodshed as we have in the time of Goodluck. If Goodluck means bloodshed for Nigerians are you waiting until your own blood is shed? (shouts of No from the congregation).

We need change, however God will do it. Look at the insecurity if you go to the northern part of Nigeria.
My fellow priest, my fellow pastors, don’t just stand up to attack this message, because you have mouth. Think well before you put your mouth, the voice is beyond your own contribution. Listen, are you waiting for your own church to be bombed before you speak out? If you go to Maiduguri, some parishes have closed down.

Go to Potiskum. People no longer go to church on Sundays in many parts of this country. Now imagine a scenario where a president cannot fight a simple insurgence. This is not an external country attack o. It is not like another country invaded Nigeria. It is an intra distraction. And many of us are claiming that it was because Buhari said that he was going to make Jonathan’s government ungovernable. Listen, let’s assume Buhari said something like that, even though it’s not Buhari who said it. So if you are the president and somebody say something like that, will you not arrest such a person?

Here is another video provided by NaijaGists.com fan. It is a bit longer than the one previously shared.