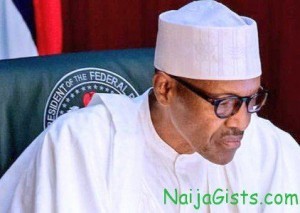 October 12, 2017 – Buhari’s Silence Over Gazillion Of Corruption Allegations Has Stained His Integrity

Nigeria’s First Lady Aisha Buhari has created a niche for herself as an exceptional wife of a president by her audacious assertion against corrupt practices visible enough for her to decipher.

She blew the lid off the cleavages of cabals adding dead weight to the strides her husband, President Muhammadu Buhari is trying to make in repositioning Nigeria and fight against corruption. She was at a time, emphatic that her husband will return from medical vacation to chase away the hyenas and the jackals from the animal farm called the presidency. Now she has locked horns with management of State House clinic over poor service delivery.

Most people berate her audacity, insisting she is supposed to be anonymous, others feel she is trying to control her husband. The cabals think she is a witch, determined to stop them from taking their own chunk of the “national cake”. She has indeed turned herself to a whistle blower, taking her role to a new height every day, in desperate effort to save her husband from looming shame.

Her revelation on the State House clinic only confirms fears of most rational Nigerians over the way and manner scarce resources are siphoned by key officials under the Buhari led administration. Considering the allocation of N4.2bn in two years to keep the place operational, it is shocking the clinic does not have a serviceable X-ray machine. Her observation is not only an indictment on officials in charge but a pointer to security risk on the life of our president who has been managing health issues. Those who squandered the state house clinic funds must be treated as terrorists.

The silence of President Buhari over gazillion of corruption allegations is making critics think popular opinion about his integrity is overrated. While the observations of Aisha is based on what she can see, there are many systemic acts of corruption allegedly perpetuated under the administration of Buhari buried with propaganda, blackmail of past administration, which many right thinking Nigerians are beginning to get irritated about. The Chairman of the Presidential Advisory Committee Against Corruption (PACAC), Professor Itse Sagay asserted that leaders of the ruling All Progressive Congress (APC), are promoting corruption, adding that the National Assembly is enjoying from proceeds of corruption. He was promptly attacked and threatened fire and brimstone by those who were his loyal fans while he was taking swipe at corrupt officials of the immediate past administration.

The wife of president Buhari has refused to turn a blind eye to the traffic of corruption moving before her on daily bases while the culprits smile happily to the banks with outrageous stash in their accounts. She knows that her husband is the one to carry the leaking sewage at the expiration of his tenure(s) in office. She is aware of the fact that those biting him and at the same time blowing breeze on his wound will be the first to cast stones once Buhari is out of power. Knowing her husband very well, she knows he will be the least affluent while the increasingly powerful cabals will be supper rich. She knows that her husband will be silenced and allowed to carry the basket of shame alone.

Sadly, president Buhari is too silent, too casual about myriads of allegations flying around those close to him. The case of former or suspended SGF, Babachir Lawal who the Senate exposed over N270m IDP grass cutting scandal is fresh despite silence from the presidency. A report has been submitted to the President as Nigerians await pronouncements, which is rather taking too long. Nigerians will not forget the allegation against Abba Kyari, the president’s Chief of Staff over N500m bribery by MTN.

There are many unfortunate cases where the present change administration has refused to convince the people they are capable of bringing Nigeria from the brinks of systemic corruption, waste, administrative laxity among other inherited and self-induced challenges. Under the present circumstance, we can only pray that the voices of the Aisha’s break the silence of the Buhari’s.

About the author: Israel A. Ebije,Abuja.