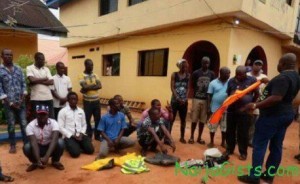 To walk successfully from Bridge Head, Onitsha, to Upper Iweka, in the same Onitsha, any time in the night is to achieve a feat. This is especially so if the person is carrying personal belongings or money. Not many are able to achieve that these days, no thanks to the marauding gangs of criminals, both petty and big time, who have rendered the once safe axis very unsafe for everybody.

The incident I just related is just one of many that have become the lot of those residing or doing business in Anambra State’s biggest commercial enclave. Crime has simply overtaken the city, while the police and other security agencies keep quiet, either as a result of incapability to deal with the situation, or because of complicity (who knows?)

Besides the incident, the entire city of Onitsha has been ravaged by crime. From Bridge Head to Okpoko and to Fegge, men of the underworld appear to have overwhelmed the security agencies. This has resulted in the killing of five police men in the city within the past one year. There was even this story of a policeman whose gun was snatched from him as he got down to eat.

To use the pedestrian bridges at night is equally dangerous as the bad boys are usually on the prowl there. A reporter with a newspaper in Awka, lost her phone thrice in Onitsha to these hoodlums. The third occasion was in front of her house when two men on a bike pulled up in front of her and her daughter in broad day light and brandished a gun before taking their phones.

There are notorious areas in the Onitsha metropolis. They include Okpoko, Fegge and Obosi. Obosi’s case beats imagination as this has been a known dangerous area for many years now, yet the police have allowed things to continue to degenerate there. It was in that place that popular presenter with the Anambra Broadcasting Service, ABS, and deejay, Magic Fingers, was shot late one evening. He managed to escape with his life and ran straight to the Borromeo Hospital where he was promptly admitted.

And then penultimate Monday, the circulation manager of the Sun newspapers, Fabian Obi, was murdered in cold blood after a gunman entered his office at Old Market Road and pumped him with bullets three times before taking his money. The killer then got down and entered a waiting tricycle or okada.

Reacting to this, the leadership of the Nigeria Union of Journalists, NUJ, South-east Zone, led by Comrade Chris Isiguzo, Vice President, and Ken Ofoma, Secretary, had this to say: ‘We received with shock the news of the killing of a Sun newspaper agent in Onitsha, Fabian Obi, by unknown gunmen. This is indeed very tragic. For such to happen at a time the military operation code-named “Python Dance 11”, aimed at checking the rising wave of armed robberies, kidnapping and other forms of crimes, is still on, with soldiers virtually at every nook and cranny of the five South-east states, made it more troubling.

‘We also want to remind the Anambra State government that the primary responsibility of a responsible government is the protection of life and property. Abandoning this responsibility, especially at this critical time when the state is preparing for a major election, resulting in the rising wave of insecurity in the state, indeed speaks volumes of the government’s commitment to security of life. Let the needful be done as quickly as possible because a stitch in time saves nine.’

Indeed, we join the NUJ in calling on the appropriate authorities, including the security agencies and the Anambra State government, to sit up and tackle the security situation, not just in Onitsha, but in other places, including Awka.

In Awka, the state capital, criminality in the Okpuno area is well documented. One dares not walk the streets in the night with personal effects. To do that is to invite a slashed arm or a broken head as a member of staff of this writer experienced. She was returning home around after seven in the evening with her camera when she was attacked on a lonely stretch near her house. Her camera was taken while she was hit on the head with a bottle and one of her wrists slashed with a bottle.

I recall that when I had a session with the immediate past police commissioner in Anambra State on the menace of criminals in these areas, he had taken offence at the question. But this is not an issue to be parried by feigned annoyance. The danger to citizens of the state in these areas is real and needs to be tackled.

Onitsha is central to Anambra’s economy and allowing hoodlums to overrun the place will hurt the state economically. The failure of government and the security agencies to check the spate of crimes in Onitsha may be counter-productive and this is why everything should be done to check the trend.

The Anambra State government has done well by investing heavily in security. The police and other agencies should reciprocate by living up to their responsibilities.

Anambra may be among the safest states in the country, but Onitsha is turning out to be the unsafest city. And if the crime indices in this city continue to rise unabated, the safest state may not be very safe after all.

About the author: Atupulazi, a journalist writes from Awka, Anambra State.

Continue Reading
You may also like...
Related Topics:anambra, crime

Buhari’s Silence Over Gazillion Of Corruption Allegations Has Stained His Integrity
Tagbo Umeike Was Choked & Strangled To Death: Davido’s Driver Arrested As CCTV Exposed Him