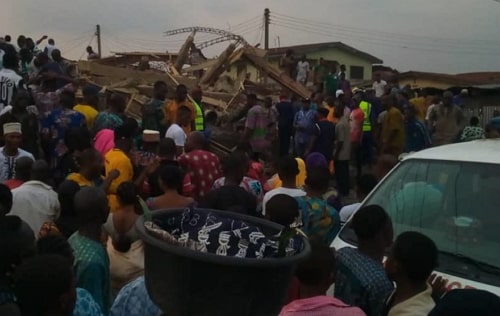 Many were feared trapped today when a 3-storey building caved in near Bode market in Ibadan, Oyo state.

According to The Nation investigation, the building collapsed at 5:54pm while bricklayers and other construction workers were rounding off for the day.

4 people were feared trapped in the rubble.

According to sympathizers, the victims made distress calls to family members but when calls were made to one of them few minutes later, there was no response.

One of those rescued alive from the rubble, 19-year-old Toheeb Gbadamosi said:

“Today is my first time of working at this place. I just came around in order to raise some money for my upkeep because things were difficult. I thank God that I came out of the rubble alive”.

One of the firefighters who spoke in confidence, said:

“We responded promptly to the emergency as we got to the scene about 35 minutes after the alert.

“We are trying our best to rescue the victims but the challenge we are facing is getting the right equipment to lift the concrete wreckage.

Another challenge is the time of the day; it will soon get dark but that will not deter us from doing our best.”

Stop Surrounding Yourself With Losers!
Lagos Speeds Up Demolition Of Defective Buildings Following Death Of 14