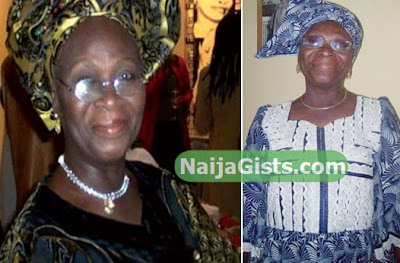 Popular Yoruba actress Bukky Ajayi who was rumoured dead in the wee hours of today has finally spoken up.

In the early hours of Monday the 29th of July, gossips took to their heels to spread the unconfirmed rumour that Bukky Ajayi is dead.

The story became so popular that it got to the hearing of the veteran actress who urged people to ignore the wicked rumour.

In a chat this morning, the actress said over 4 people have ringed her line over the death rumour.

The veteran actress said she didn’t take the matter seriously until she received calls from her daughter and husband.

“I’m hale and hearty, and nothing is wrong with me,” Mama, as the actress is fondly called, said

Though the actress was critically ill for a while but she has since recovered from her age-related illness.

The ex-village headmaster star has retired from acting but she still occasionally features in musical videos by invitation.