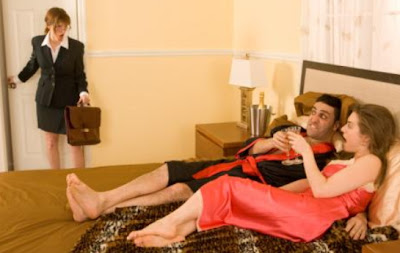 Mrs Rebecca Bamidele, the wife of one Pastor Israel Bamidele recently told a Customary court in Lagos how she caught husband engaging in adult act with a female prayer partner in their bedroom overnight.

She claims the act crashed their 15-year-old marriage.

Mrs Rebecca further said her hubby a school proprietor and a full-time pastor who filed the divorce petition against her falsely accused her of infidelity.

“It was Bamidele who brought his female prayer partner to his bedroom for prayers.

“I was surprised that my husband locked his prayer partner, wife of another man, in his bedroom overnight. The act not only led to cracks in our marriage but it also led to the break up in the female prayer partner’s home because after I had left him, people were still seeing my husband and the woman together.

“Her husband eventually sent her packing from her matrimonial home,” Rebecca disclosed.

Pastor Israel Bamidele eventually files for divorce over frequent fighting and lack of care from Rebecca. He claims he is no longer in love with the mother of his 3 children.

According to PM report, when asked the position of her husband’s family on the crisis that engulfed their relationship, Rebecca said she once travelled to Osun State in southwest Nigeria to meet her mother-in-law but the old woman said she should allow her husband marry another wife because her father-in-law, who is a prophet, married three wives, adding, “when I returned to Lagos, my husband quarrelled with me, saying why should I go to his homestead in Osun State to inform his mother about issues in our marriage in our Lagos home?”

Apart from the issue of hosting his prayer partner in his bedroom, Rebecca alleged that she caught the pastor sleeping with his school secretary for about a week but she could not complain because her husband would beat her silly.

She said, “anytime I complain, my husband will say I was becoming too stubborn for him. He would say in Yoruba, ‘ila ti n ga ju onire lo’, meaning, the okro plant was becoming taller than the farmer.”

Their case has been adjourned till August 27, 2013 for judgement.

See how a female prayer partner broke a Pastor’s home.

Why would he bring a female prayer partner into his bedroom?