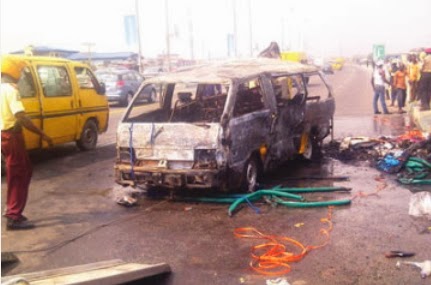 An 18-seater commercial bus with plate number APP366XD had a tyre burst. In a bid to control the vehicle, the driver applied the brakes suddenly, thus causing the vehicle to somersault severally.

According to eyewitnesses, the accident happened around 1:50pm.

“We had to break the windscreen of the bus and pull out the victims one after the other as part of the bus was already on fire,” a traffic official said.

The victims were evacuated from the bus by LASTMA officials and taken to Gbagada General Hospital for treatment.

A witness said the entire bus caught fire some minutes after the evacuation of the victims.