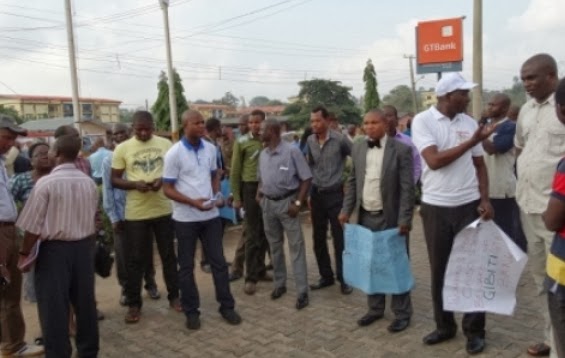 Industrial workers under the Joint Public Service Negotiating Council (JNC) Ondo State on Tuesday shut down business activities at the headquarters branch of the Guaranty Trust Bank (GTB) on Alagbaka Road in Akure, the state capital.

The workers, chanting solidarity songs, were protesting non-payment of their salaries.  They also alleged sabotage of their efforts by the officers of the bank.

They said that GTB, without the knowledge of the state government, had withheld their salaries with the intention of using the money to defray its loans.

Many of them carried placards bearing such inscriptions as: “Enough of GTB Exploitation Antics in Ondo State”; “Workers and People of Ondo State Beware of GTB in Akure”’ “We are tired of GTB behavior”; “GTB will ruin our life in Ondo State”; and “We won’t take this no more for GTB.”

One of the protesting workers told SaharaReporters that their salaries were withheld by the bank while various unknown alerts were sent to them from the bank.

“As at now I have not received my January salary which is not supposed to be so. We learnt that GTB is planning to defraud us. They want to use our money for loans. We won’t take this from them.”

Speaking with journalists, the JNC chairman in Ondo State, Comrade Oluwole Adeleye Samuel, also alleged that the bank was trying to sabotage the workers by using their salaries for defraying loans.

“This bank without the authority of the government of Ondo State been represented by the Account General took Seven Hundred and Six Million Naira (N706.000.000.00) meant for the payment of workers salary to defray a loan.

“As a result of this our salary has not being paid. We are tired of this barbaric act of the bank. They are holding us for ransom and we won’t take it from them. I can assure you that we won’t allow any transaction to occur in this bank unless they pay our people”.

All effort by SaharaReporters to obtain the position of the Managing Director of the bank proved abortive, as staff kept mute when asked about his whereabouts.

But the Head of Operations of the bank, whose chest badge read ‘Kehinde Oyeleke,’ but who refused to mention his name to SaharaReporters, angrily declined to comment on the issue.

The workers vowed to continue the protest and threatened tio occupy the entire street leading to the Alagbaka branch if no positive progress was made, adding that they would not allow customers into the bank.

Meanwhile the Automated Teller Machines (ATMs) of the bank have been shut down with the protesters threatening to deal with any workers of the bank who dared to attend to customers.

As of the time of this story, officers of the Ondo State Command of the Nigerian Police Force were being drafted to the scene to curtail any violence and prevent the protest from being hijacked.