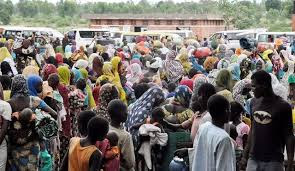 887 Nigerian refugees arrived at Banki, Borno State, on Tuesday, following a request by the Cameroonian government to Nigeria, to allow it repatriate them.

Tamfu said the request was prompted by fear and suspicions by Cameroon, that some of the refugees might by Boko Haram insurgents.

The statement reads: “The returnees arrived in six trucks sent by Nigeria, following a meeting with the governor of the far north region of Cameroon on June 19.

“At the meeting, Nigeria was requested to cause the return of the refugees, which the Cameroonian authority suspects may also comprise some elements of Boko Haram.

He added that the latest group of returnees comprise 233 females, 187 males, 236 girls, and 231 boys, who were living in host communities in Kolofata, a far north region of Cameroon.

According to him, it was reported that most of them do not have much in terms of personal effects, but a few items in plastic sacks, while some returned completely empty.

Tamfu said more refugees had shown interest in leaving Minawowa Camp in Cameroon, adding that they were anxious to return following reports of improved security back home.

The total number of Nigerians deported from Cameroon now stands at 19,257.