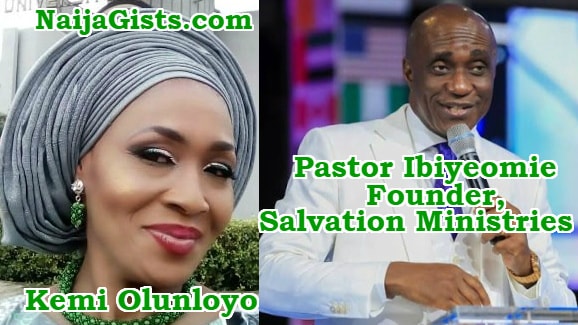 Saturday January 6, 2018 – CAN Joins Charly Boy To Intervene In Kemi Olunloyo’s Case As Pastor David Ibiyeomie Refuses To Forgive Her

In a statement on Friday by its National Publicity Secretary, Raphael Adebayo, the group described Olunloyo’s detention as not only disheartening but unlawful According to the group, it is what is even more disheartening was the manner in which the Nigerian people, the Christian community, and indeed the legal system in Nigeria seemingly became disinterested in ensuring that justice is tempered in the case involving Ms. Olunloyo It therefore asked the Federal Government and other relevant authorities to uphold justice and the fundamental human rights of Ms. Olunloyo by ensuring she gets the justice she deserves.

The statement reads in part:

We believe that her protracted incarceration belies the fundamental principles upon which our legal system and even the correctional facility where she is being held was established.

“Regardless of whatsoever personal opinion anyone may hold against Ms. Olunloyo, the fact remains that no Nigerian deserves to be treated less as a human as she is currently being treated. Ms. Olunloyo, like every other Nigerian, has the right to freedom of expression and fair hearing.

If at all she is guilty as charged, she deserves to be legally and publicly tried instead of being kept for a long period of time in an unkempt and stenchful prison facility.

“In conclusion, we urge the Federal Government of Nigeria, the Rivers State government, and every concerned authority to swiftly intervene in this matter and ensure that Kemi Olunloyo gets the justice that she deserves.

We believe that justice delayed is justice denied, and Ms. Olunloyo, like every other Nigerian, deserves better than she is currently being served.”

Ms. Olunloyo has been in detention since October 12, 2017, over a controversial issue involving her and a renowned Nigerian pastor, David Ibiyeomie.

Meanwhile, the Christian Association of Nigeria (CAN) said it is making effort to ensure Ms Olunloyo gets the justice she deserves.

However, it is doing so privately since Pastor David Ibiyeomie belongs to the Pentecostal Fellowship of Nigeria (PFN). Pastor Bayo Oladeji, the Special Assistant on Media and Communication to CAN President, Rev Samson Ayokunle, told Vanguard:

“As for Kemi Olunloyo, people should be able to know that CAN is not a human rights organisation. However, it is making efforts to ensure she gets the justice she deserves albeit privately because the Pastor involved belongs to the PFN.”