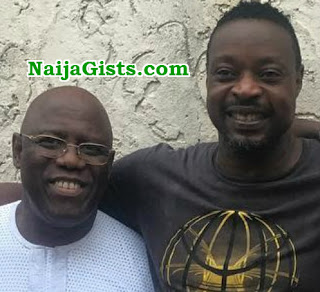 Controversial musician Eedris Abdulkareem has praised his former label boss, Kenny Ogungbe for guiding him right when he wanted to marry years ago.

In an exclusive chat with the entertainer Abdulkareem said Ogungbe popularly called Baba Keke helped to shape his life with fatherly advice.

“My wedding day was a very lavish one and Baba Keke was my best man. I chose Baba Keke to be my best man because he has always been like the father I never had.

I lost my father when I was only three years old. When I was still at Kennis Music, I went to collect my royalties when I met Baba Keke and he called me aside to give me a piece of advice.

He advised me to ensure that I married only one woman and I should not let any woman other than my wife bear children for me. I agreed with him. He further told me to make sure I did not waste my sperm on different women.

He told me to settle down and be a responsible man. That advice has helped shaped my life since then. A lot of girls I dated at the time were not happy with my choice of wife but I was happy about it.

In fact, I intentionally avoided throwing a bachelor party because I knew something could happen that night that would ruin my marriage. After we got married, we went on a honeymoon and my wife got pregnant a month later.”

The troubled musician is definitely seeking a comeback as his career hasn’t been the same since he left his former label boss.