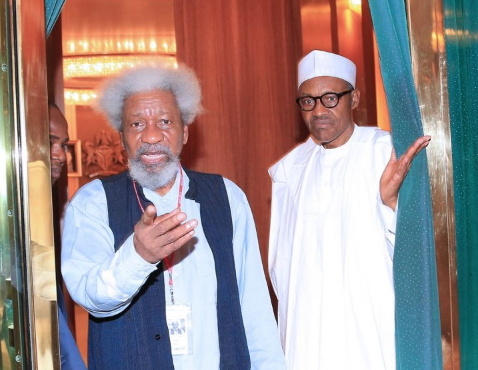 Prof. Wole Soyinka, has said Nigeria is on a terminal nose-dive and that its pilot, who he noted is missing, must cry for international help as many had advised.

The Nobel Laureate who stated this in a statement he issued on Sunday titled, “May Day! May Day!! May Day!!!,” in commemoration of the 2018 Workers’ Day described the ongoing killings in the country as “ethic cleansing.”

The critic, who said May Day, that he uttered thrice, signified a distress call, adding that long before its adoption for that function, however, and more traditionally, there did exist Labour (or Workers’) Day, dedicated to the entitlement of workers to the value and dignity of their labour.

He noted that the Nigerian constituency was left to determine which attribution – or both, or none – was deafeningly clamorous on May 1, 2018.

Soyinka stated, “No matter, one feels it a duty to call the attention to the painful convergence of both appropriations. Could such a co-option serve equally as summons for a last-chance, eleventh hour reprieve?”

The celebrated playwright also drew what he termed ‘eerie parallels’ in the country’s current situation to a “certain May Day disorder, one in which that distress call was never heard.”

He further likened the present state of things in Nigeria to the Aeroflot Flight 593 of September 28, 1994 in which all passengers died because the captain unprofessionally left the pilot’s seat for his family members while he went to salute the passengers.

Soyinka said, “After preliminary official denials, the undeniable – and tragically inappropriate factor of the crash was formally acknowledged – a laissez-faire, unprofessional conduct with human lapses, among which nepotism – by that, or any other name-loomed large. The captain was not even in the pilot’s seat – others were! They were the pilot’s family – mostly his children. The family member who actually begun the spiral of disaster by pulling the wrong control leaver was – the Captain’s son, to whom his even younger daughter, some moments earlier, had yielded the controls. The pilot’s seat had been turned into a family game of musical chairs.

“Where was the Captain? Somewhere along the aisle, saluting the passengers – all quite proper, and indeed encouraged by regulations. He had placed the plane on auto-pilot – just as this nation has been for some time – so he walked between the seats, dispensing and acknowledging greetings – it was a long flight to Hong Kong, after all.

“The plane went into a sharp turn after the wrong lever was pulled, and the auto-pilot disengaged. The original flight pattern was annulled -does that echo a campaign manifesto? – and the plane was now in unqualified hands. It took ages for the pilot to regain his control seat as some passengers were already tumbling from their seats into the aisle and he had to fight his way through bodily obstacles. All that, from reconstruction of events.

The ‘black box’ – or flight recorder – indicates that the pilot never even got round to shouting ‘May Day’ over the radio – he was too busy struggling to restore the plane’s technical functions, shout instructions, pull the plane out of a nose-dive, and attempt to right the craft – too late!

“Now flash forwards one decade to our present, and recall the number of desperate organisations calling on the Nigerian captain to bury his pride and cry ‘May Day” across all airwaves. Call out for international help to rescue a nation on its terminal nose-dive!

“There has been no sign of willing, while the screwed-up plane is now in its corkscrew dive. Even if this captain regains his seat before the crash, it is open season whether or not, like SUV Flight 593, it will not stall, and head straight for Zuma rockface. Strangers are in control in the cockpit. Put simply, the captain is missing. The rockface is in right in our faces.”

He further called on President Muhammadu Buhari to order all land usurpers in the affected towns and villages across the country to vacate the forcefully occupied lands within 48 hours.

Soyinka urged him to order the military and the police to treat illegal land occupiers as terrorists wherever they were found.

He said, “Give a nationwide order to all land-usurpers in the affected towns and villages across the nation to quit those forcefully occupied lands within a forty-eight hours deadline.

“Issue orders to the military and police that, wherever illegal occupiers are found, they should be meted the same treatment as are accorded terrorists. Instruct all agencies that, once cleared of usurpers, the rightful occupants should be escorted back to their farmsteads and villages and provided maximum protection.”

Saying that the government must go beyond arresting a token handful of herders caught with arms, he added that there were still hundreds of them in the forests.

He added, “It is not enough to back the anti-open grazing laws, so late in the day, but we shall leave that for later. Right now, the violated and dispossessed demand restitution, and with no further delay or subterfuge. All available forces should be deployed to right a hideous, unprecedented wrong that has left the nation drowning in blood – we simply cannot continue one day longer to endure this forceful feeding of human blood.

“The plain expression is “ethnic cleansing” and we must not beat around the bush. The shade of Rwanda hangs over the nation. Afterwards, we can move into reckoning. This spells meticulous investigation, identifying the high-placed sponsors within this nation, some of whom have launched mercenary units to intensify carnage and chaos in order to stem the stride of Nemesis closing in on them for past criminalities, and the cascade of corrupt revelations.”

The celebrated playwright queried what the minister of defence, who allegedly openly justified the homicidal rampage of nomadic herdsmen, was still doing in the Buhari government.

Soyinka noted that there were still other pressing and disturbing questions which would be held back for now in order not “to impede the pressing imperatives and humane priorities of the current crisis.”

“Right now, however, the agenda has to be restitution. Restitution to the displaced, the maimed, the traumatised survivors and the nation’s suppurating psyche. The torrent of internally displaced persons is a national shame, and the growing number of the kidnapped an embarrassment.

“The plane cannot remain on auto-pilot as hitherto, while the pilot strolls up and down the aisle, assuring passengers that all is well. A Happy May Day – hopefully in the not too distant future – to all who labour for humanity.”

Dirty Fuel Now The Leading Cause Of Death In Nigeria
Dino Melaye, The New King Of Drama In Nigerian Politics