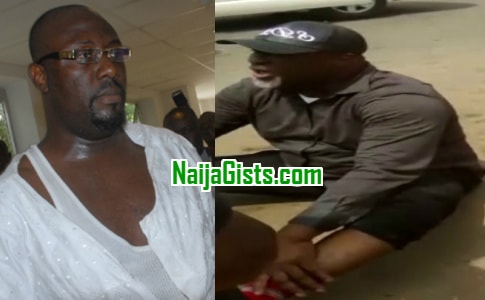 When news broke last week that maverick senator, Dino Melaye jumped out of a moving police vehicle after his arrest by operatives of SARS, I was unperturbed and unfazed. Dino is the king of drama in Nigerian politics. It is not unusual to find a streak of absurdity in most Nigerian politicians. But Dino is different. He is the master when it comes to playing in the theatre of the absurd. Blessed by the creator with infinite capacity for drama, unusual eccentricities and proclivities, he is also endowed with the gift of gab and courage which some of his detractors have derisively referred to as Dutch courage.

His recent arrest by the police is based on a slew of criminal allegations against him including armed robbery, and illegal possession of firearms. These offences were allegedly committed in his native Kogi, where the police were repatriating him to for prosecution before he transmuted into an actor, alleging that the police in connivance with the state governor were planning to assassinate him once he sets his foot on home soil. Ironically, Dino and Governor Yahaya Bello were once pals. He once declared at an event during the early days of the Yahaya Bello administration that the people of Kogi chose late Prince Abubakar Audu but God chose Yahaya Bello to be governor. His arrest also coincides with the beginning of the recall process from the National Assembly by his constituents. Dino has alleged on several occasions that the recall process was orchestrated by Governor Bello and sponsored with the princely sum of N1billion naira.

Pundits have speculated that his arrest is a ploy by the powers that be to distract him so as that he does not interfere in the recall process. That may be true. But what I find difficult to understand is why he employed all manner of tricks in the book to evade arrest by the police? Even if the charges against him are trumped up, he is not the first Nigerian politician to suffer such fate, just as he is expected to have known the risks of his profession before entering into it. His idol, Bukola Saraki, also went through a similar ordeal recently and he embraced it stoically like a gentleman. People like Dino, famed for his flamboyant lifestyle and love of the good life are usually afraid of losing their freedom because they will be denied access to the pleasures that they enjoy.

As a student of the University of Port Harcourt, I was among those who hosted then Honourable Dino Melaye at an event on campus in 2010, after he was suspended for fighting by his colleagues in the House of Representatives. We were under the impression that he was fighting for the masses of the Nigerian people. His actions and antics in the Eighth Senate have proven that we were deluded in believing that he was a genuine radical fighting for the welfare of our people.

As a senator, he is a prominent member of the cabal responsible for the anti-executive and anti-masses posture of the Senate. He has also courted not a few controversies. If he is not singing songs to spite his enemies, dreaming dreams, or mouthing obscene epithets against a female senator, then he is displaying pictures of his luxury cars on social media, hosting costume parties, or enmeshed in a certificate scandal. Dino is a stormy petrel that eats, breathes, and lives controversies. Though currently in the National Hospital recuperating from injuries sustained from his James Bond moves, the last may not have been heard from Dino. Nigerians should expect more drama from the drama king in the days ahead.