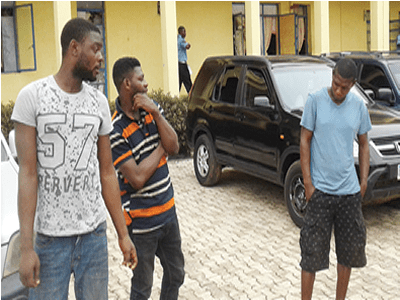 Car Thieves Who Unlock  Stolen SUVs With Master Key & Sell Each For N50,000 Say There Nothing Wrong In Stealing & Selling Cars

A 3-man gang who specialises in stealing Honda SUV in different parts of Ondo state has been caught.

The suspects identified as Imafidon Roland, Adeoye Fadamitan Desmond, Olayemi Adeoye and Imafidon Roland, said there was nothing wrong in stealing and selling cars. The gang members have a special key, which they used in igniting the vehicles’ engines, before moving them from where they were parked.

The principal suspect, Adeoye, said he bought a master key purposely to unlock and steal cars parked at market places. He confessed that he sell each of their stolen vehicles for a paltry sum of N50,000. According to him, he usually sells the cars to Desmond and Roland.

“Anytime I identify a vehicle, which I wish to steal, I would go to the area with my special key. I will take the car to Desmond and he would give me N50,000.”

According to Desmond, who is a graduate of Mechanical Engineering from Osun State Polytechnic, Esa-Oke, the prices at which he buys the cars made him culpable of receiving stolen property.

He said: “I used to repair the cars before selling them to unsuspecting buyers.”

The state Commissioner of Police, Mr. Gbenga Adeyanju, said that Adeoye specialised in stealing vehicles in Akure, while the duo of Roland and Desmond were in the habit of selling stolen vehicles.

“The suspects confessed to have stolen the vehicles. Their leader, Adeoye, narrated how they had been perpetrating the crimes within and outside Akure. Efforts are on to arrest other fleeing members of the gang.”

Welder Slams Padlock On Apprentice Head For Licking His Honey, Orders Him To Continue Working As Blood Gushes Out Of Head
Man Who Falsely Accused Friend Of Stealing Bajaj Motorcycle Sentenced To 5 Strokes Of Canes