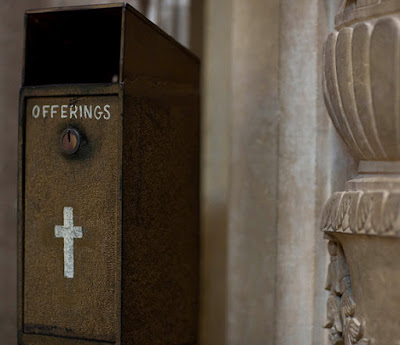 St Peter’s Catholic Church, Ejigbo congregation were stunned after one of the worshipers who attended morning mass was caught stealing money from the church offering box in the church’s chapel in Lagos State, western Nigeria.

The man simply identified as Kinsley perfected the act after he brought some gum in a small container and stick to the church.

He robbed the gum on the small stick which enabled him to bring out some money from the offering box through a hole.

The worshipers expressed shock because Kinsley was well known to them as one who attends church activities regularly in the church.

But he had another motive on the fateful day.
The incident happened in the morning on Tuesday during the morning service.

We gathered that when the service had closed, he went inside the chapel for additional prayer and blessing.

He waited after others had left the chapel and armed himself with a stick and small container containing some gum which he hid in his pocket.

When he thought that nobody was around he robbed some gum on the stick and pushed it through the offering box hole and brought out some currency notes that had stuck to the stick.
When he finished, he hid both the stick and gum in his pocket along with the money he had stolen.

Unknown to him, the security guard saw what he was doing from outside through the window when he pretended that he was praying.
When he was about to leave the chapel, one of security men accosted him and searched him and discovered the stick and the gum including the N5,000 he stole.

When he was confronted, he confessed and pleaded for forgiveness and offered to return the money.
When the parish priest was contacted and he met him, Kinsley also pleaded and asked the parish priest to forgive him. He blamed the devil for the act.

He also explained that his wife was heavily pregnant and he needed money to take care of her.
The parish priest allowed him to go after he had returned the money without handing him over to the police.

However, when he got home, he transferred his aggression on his wife by battering her.
The assault was reported to the police and he was arrested and detained at the station.
We gathered that it was not the first time Kinsley had been caught allegedly stealing in the church.