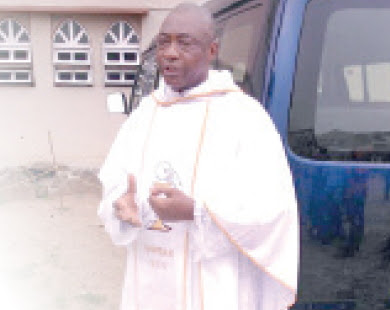 September 9, 2017 – How Lagos Catholic Priest Daniel Nwankwo Escaped Assassination Attempt As Gunmen Shot Him On The Face After Mass

Less than a week after a Catholic priest was killed by suspected kidnappers in Imo State, the parish priest of St Thomas Catholic Church, Onilekere, Ikeja, Lagos, Rev Fr. Daniel Nwankwo, was shot on Friday morning and he is battling for his life at the state university teaching hospital, LASUTH.

An eyewitness who identified himself as Valentine Umenweani told Saturday Sun that three gunmen gained access into the church shortly after parishioners left after the Friday morning service.

“After the confession session, most of the parishioners left the church premises and there were few persons especially women and children who stayed behind to pray. I believe that they had gone into the church and partook in the morning mass before approaching us.

“I was standing at a corner of the church with the priest when the three of them approached us. They asked to see the parish priest and the priest told them that he was the one.

“They told him that they were sent by a parishioner who is sick to collect N5000 from him. The priest told them that he does not know who they were referring to and cannot grant such request.

“Suddenly the young men who were carrying a bag brought out their guns and started asking the priest to bring out the money or they will kill him.

“He told them that there is no money with him and they started threatening to shoot. The priest handed over his mobile phone to me but they immediately collected it from me and put it in their bag. The priest suggested that they should go to the parish house that he has some money over there but they refused and started beating him.

“While they were dragging him, one of them shot him in the face. Although he was hit, the priest miraculously escaped in the confusion while I ran to another direction. They searched for him and when they could not find him, they also started looking for me. Since they do not know much about the church, they took to their heels and scaled the fence of the church and escaped.”

On how the priest landed in the hospital, Valentine said he managed to run to the nearest medical centre before he was able to contact members of the church. “Miraculously, despite the bullet wound, the priest dragged himself to the nearest hospital. Unfortunately, the security man who normally stays at the church gate was not in the premises when it happened.”

Continue Reading
You may also like...
Related Topics:attack, catholic, Priest