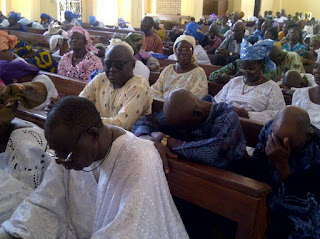 Rev Father Peter Ayala reportedly killed himself while cleaning his double-barrel gun before the morning mass.

We learnt the accidental gun-discharge incident happened when some of the worshippers had already gathered for worship around 7am.

According to sources, when the worshippers heard a lound sound of gun from his house, church elders immediately rushed to his apartment. They found the Rev. father lying in a pool of his own blood, an incident that threw the whole church into disarray.

The Church elders were said to have reported the incident to the Bishop of Auchi Diocese, Dr Gabriel Duniya, who also was told by security agents that the priest died when the rifle he was cleaning went off.

“The incident is unfortunate. The state command is yet to the get full details of what transpired before the priest’s death.”

Heya! May his soul rest in perfect peace.