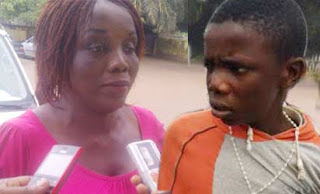 August 27, 2013 – Mother Of Boy Who Flies Arik Airplane On Tyre From Benin To Lagos Narrates What Happened

Mrs Evelyn Ohikhena, the mother of the 13-year-old boy, Daniel who flew Arik Airplane on tyre from Benin to Lagos Airport on Saturday has been quizzed for hours by SSS and FAAN officials.

Evelyn who claims she has never been to the airport before said she has no clue on how her son got there.

Hear what she told investigators on Monday;

“My son answers Daniel in school and Ricky at home. I went to my elder sister’s place who put to bed and when I got home the next morning (Saturday), I couldn’t find him. My daughter told me that they quarrelled in the night because he woke at midnight to watch movies and she told him to stop watching movie in the night and she said he eventually slept in the parlour while she said she went back to sleep in the room.

“One of his younger brothers said he saw him remove all his school books from his bag; so I asked my neighbours whether any of them saw him and they told me that at around 5 to 6 am, they heard sounds that somebody was opening the gate but never thought it was my son. He doesn’t go out. What I know is that he is always watching films in the house but he doesn’t have friends.

“I went to Oba Market police station, they referred me to Evbuotubu police station, when I got there they said they will declare him missing after 24 hours and that I should come back the next day.”

“He is always at home, I have never seen anybody come to look for him and he doesn’t have friends. I am begging the government to help me, because I have never been to the airport before, I have been to Lagos before so they should help me. I don’t know how he manage to get there but I just thank God that he is alive.

This young boy nah real crook.. How he managed to escape security scrutiny at the popular airport still baffles many.

Hope the government can temper justice with mercy and set him free.