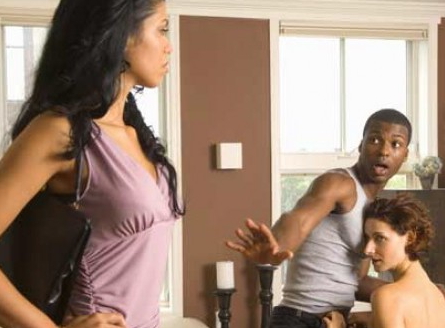 May 31, 2017 – I Caught My Husband Sleeping With A Girl On Our Matrimonial Bed When I Came Home Unannounced

Mrs Folake Alimi, a 40-year-old trader today told an Igando Customary Court in Lagos that she caught her husband making love to a girl on their matrimonial bed.

The woman said this while responding to a divorce suit filed by her husband whom she accused of cheating on her.

“I came home unannounced and I caught my husband making love to a girl; he jumped up when he noticed my presence.

“I also saw him with a woman in a hotel near our house when I went to buy food.

“He begged me not to expose him because of his position in the church and I kept it a secret,” she said.

The respondent said her husband was always jealous and had often accused her of dating every man he saw her with.

“My husband stopped me from working claiming men are dating me,” she said.

The mother of four said that what used to cause their frequent fights was his penchant for buying things for the children of his first wife and ignoring her own.

She begged the court not to grant her husband’s wish for the dissolution of the marriage, claiming that she was still in love with him.

Her husband, Joseph, had approached the court seeking to end his 11-year-old marriage over his wife’s alleged infidelity.

“My wife is cheating on me, she receives calls from men at odd hours,” he said.

The petitioner accused his wife of going out and returning at will.

“My wife abandoned me and the children for one year for an unknown destination; she came back and left for another seven months.

“She was always going to parties and spending days before coming back,” the estranged husband said.

The 47-year-old businessman said that his wife’s son from another father, in company with a gang, attacked him in his church with cutlass, rods and other dangerous weapons.

“My step-son that I trained came to my church with his gang in order to beat me up because I beat his mother,” he said.

He urged the court to terminate the marriage, saying he was no longer in love with his wife.

The President of the court, Mr Adegboyega Omilola, adjourned the case till June 28 for further hearing.