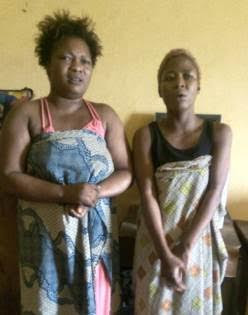 May 31, 2017 – 2 Prostitutes Arrested For Stabbing Married Client To Death At KS Hotel In Ifo Ogun State

2 sex workers are now cooling in police detention in Abeokuta after they allegedly killed a male client at KS hotel in Abule Ifo, Sogbodile area of Ifo LGA of Ogun state.

According to police investigation, the deceased a married man identified as Adeyinka Olayinka was supervising a building under construction in the area and decided to pass the night at the hotel.

He later met the suspects identified as Kudirat Raji aka Angela and Esther Basiru.

He agreed to pay Kudirat Raji an unspecified amount of money for overnight service but in the morning, he reneged on the agreement.

An argument soon started between Kudirat and Olayinka. In the heat of the argument, Esther Basiru later entered the room, broke a bottle and used it to stab the deceased on the armpit.

The broken bottle reportedly cuts one of his nerves, consequently upon which he bled to death.

The hotel management later alerted police who came over to arrest the suspects.