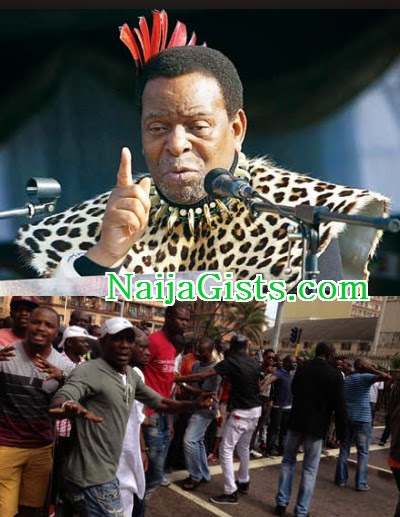 The lives of many Nigerians and foreigners living in Durban and other cities in South Africa are in jeopardy as the country embarks on killing of foreigners. Not less than five and 2000 foreigners have been killed and displaced in the on­going xenophobic war.

The crisis, which is only expe­rienced in Durban, a city in the country, has put foreigners on their toes and heels. The other foreigners are suspected to be from sister countries and have raised alarm for their government to send rescue mission. Those who could afford to return home have done so without hesitating.

According to a local source, some of the immigrants left the country without anything they owned and more than 2,000 for­eigners have sought shelter in refugee camps in the coastal city.

The refugee camps, set up on sports fields around Durban, will not be large enough if attacks on immigrants continue, said Imtiaz Sooliman, of the Gift of the Giv­ers organisation. Those who can afford it are planning to leave the country, he said.

The attack, according to po­lice authority, has started since March in a quiet coordinated form. The police said that five people have been killed and 74 people arrested “since attacks against immigrants began at the end of March,” said police spokesman, Col. Jay Naicker in a statement.

Cause of the crisis

A Nigerian, Chidindu, who works at Durban City Mall, said over the phone that he has fled to Johannesburg.

“Brother, I had to leave that town. It’s true that they are fight­ing foreigners, they said that we foreigners have taken their jobs and the fewer jobs available do not have good pay because for­eigners would take jobs without consider­ing the pay,” Chidindu stated.

Like Chidindu, different groups and news agencies have said that the crisis started as a result of unavailability of jobs for the Zulus. Some said that the crisis might have been incited by the comment of a very popular and influential figure among the Zulu ethnic group, Zulu King Goodwill Zwelithini, who said that for­eigners should “pack their bags and go.”,

Zwelithini has since appealed for an end to the unrest, and says he has been mis­quoted, but many of those rioting were heard chanting “the King has spoken”, Pa­tel said.

The southern African nation of Malawi plans to repatriate at least 400 of its citi­zens following the attacks in South Africa, said Kondwani Nankhumwa, Malawi’s in­formation minister.

Malawi is currently in discussions with South Africa to arrange temporary travel papers for stranded Malawians because most lost their passports in the chaos, Nankhumwa said.

“Most of them fled with literally nothing to safe camps,” Nankhumwa said. “The numbers will swell since some Malawians are in hiding.”

South Africa President Jacob Zuma con­demned the violence and assigned several cabinet ministers to work on the problem with officials in KwaZulu-Natal province, which includes Durban.

The government is addressing South African citizens’ “complaints about illegal and undocumented migrants, the takeover of local shops and other businesses by for­eign nationals as well as perceptions that foreign nationals perpetrate crime”, Zu­ma’s office said in a statement.

[By LAWRENCE ENYOGHASU WITH AGENCY REPORT]