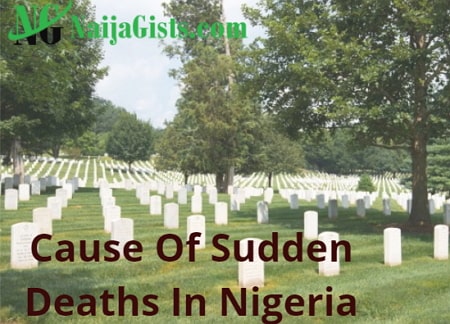 What are the causes of such sudden deaths? What are the preventive measures that can be put in place to avoid them? Are there any warning signals for potential victims?

Research conducted by some Nigerian teaching hospitals have identified stroke and heart attack as the major causes of over 93.7 percent of sudden and unexpected deaths (SUD) in the country.

The researchers also found that more males than females, at a ratio of 2:1, are affected, and the average age of the victims is “47.3 years. They blamed the rise in SUD on rural to urban migration, increased salt and fat intake from the consumption of processed foods, increased tobacco use and sedentary lifestyle.

To check the rising cases of sudden death, the medical experts called for urgent review and upgrading of critical care management facilities in the country, as well as improvement upon the level of awareness, control and management of hypertension among the populace.

They also recommended that Nigerians should engage in physical activities in order to protect their heart health and reduce the risk of cardiovascular disease (CVD), including heart disease and stroke.

The Nation learnt that the Nigerian Institute of Medical Research (NIMR) Yaba, Lagos, has already started a nationwide study on the rising cases of SUD even as the Federal Ministry of Health (FMoH), with support from the World Health Organisation (WHO), is planning a national survey on Non Communicable Diseases (NCDs).

This media house also went round to sample people’s opinion on how often they go for medical checks and it was shocking to discover that people are too busy trying to make ends meet at the detriment of their health.

In an interview with Mrs. Clara Chukwuoma, a market woman, she said “Medical check? Where is the money to go for it, when I’m busy selling my market to get food for the family and make ends meet? I don’t have the time and the money for that, biko,” she said.

Mr. Ishola Owonikoko, a businessman’s response was similar. Even though he seemed a little well-off, he practically lamented the lack of time. “The last time I went for medical check was 5 years ago when the medical team came to my area.”

Another study titled “Sudden Cardiac Death: Clinical Perspectives from the University of Maiduguri Teaching Hospital” and published in World Journal of Cardiovascular Diseases concluded: “Sudden cardiac death is common among our patients admitted with cardiovascular diseases. The most common etiology is ischemic cardiomyopathy, followed by peripartum cardiomyopathy. Most of the victims were young, and there were no optimum resuscitative measures.”

‘People should create time to rest’

Said Dr. Ehis Ukpebor, a gynecologist and CEO, Idowu Specialist Hospital, Ojota, Lagos, “There are lots of reasons why people slump and die. Let me go straight to the major ones.

“Stress – The last time I checked, I realised that people no longer give time for themselves. No time to rest, due to the nature of their jobs and other activities. You will see a lot of people waking up as early as 3am for work, coming back late in the night. This is rampant in the country today. A lot of people don’t know how to manage crisis. The situation on the road, activities at work, all these contribute to stress.

“People know how to endure pains and headache. These are some of the things many people no longer pay attention to. By the time the whole issue piles up, it becomes what we call stress. When one is stressed without proper medical attention, it kills.

“Another one is High Blood Pressure and poor diet.

Eating foods that will nourish the body should be a habit not just eating anything.

For instance, diabetes. If someone is diabetic, without proper care, there is possibility that the person would slump, thus, we can call this primary cause of death.

“The secondary one is cardiac arrest. A person might slump and if taken care of, would survive. But once a person slumps and the heart is gripped (cardiac arrest), it’s the end. A lay man would say he slumped and died but cardiac arrest is totally different. It has no disease attached. Once it happens, it has no remedy.

“People should create time for medical check-up. Go to a hospital, examine your body, let medical experts run a test on your body every time.

“Stress is something that kills fast.

We are all thinking of money and how to settle bills. In the process, the body is stressed. Also what we eat helps in fighting sickness.

This is why I always tell people to inspect what they eat. No matter how little the food is, we should eat balanced diet. All these help the body against crisis.